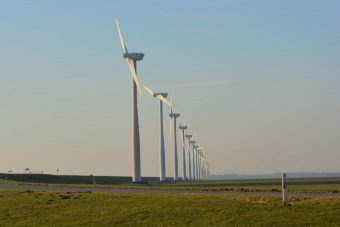 In a move that puts the “R” in regressive, a group of Republican lawmakers in Wyoming just launched a bill that would effectively ban selling wind and solar power in the state. The measure proposes to fine utilities for purchasing energy produced by large-scale renewable power projects.

According to Inside Climate News, the bill is chiefly sponsored by representatives from the state’s main coal-producing counties. If enacted, it would force utilities to use power from only approved energy sources like natural gas, nuclear power, hydroelectric, oil – and of course coal. Your average homeowner could still install a rooftop solar, backyard wind or other renewable energy setup, but the state’s utilities would get slapped with big fines for buying power from renewable projects.

According to Inside Climate News, the move is confusing some locals who know the lay of the land. “I haven’t seen anything like this before,” said Shannon Anderson, director of local organizing group, Powder River Basin Resource Council. “This is essentially a reverse renewable energy standard.”

But Inside Climate News adds that Republican Senator David Miller, the bill’s sponsor, says the goal of the legislation is to make sure Wyoming residents have access to inexpensive power.

“Wyoming is a great wind state and we produce a lot of wind energy,” Miller said. “We also produce a lot of conventional energy, many times our needs. The electricity generated by coal is amongst the least expensive in the country. We want Wyoming residences to benefit from this inexpensive electrical generation. “He added that he doesn’t want to see Wyoming “averaged into” other states that require utilities to supply “more expensive” renewable energy.

The proposed bill would allow renewable energy producers in the state to sell power to customers outside Wyoming without a penalty. The cost of selling power in their own state would be $10 per megawatt hour of energy sold.

Republicans significantly outnumber Democrats in both the state’s House and Senate, but Miller still puts his chances of passing the bill at “50 percent or less.”