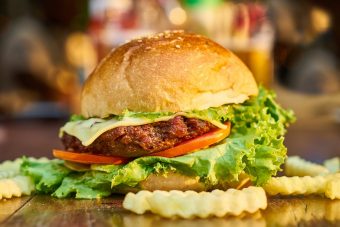 Food and farming is one of the biggest economic sectors in the world. We are no longer in the 14th century, when as much as 76% of the population worked in agriculture – but farming still employs more than 26% of all workers globally. And that does not include the people who work along the meat supply chain: the slaughterers, packagers, retailers and chefs.

In 2016, the world’s meat production was estimated at 317m metric tons, and that is expected to continue to grow. Figures for the value of the global meat industry vary wildly from $90bn to as much as $741bn.

Although the number of people directly employed by farming is currently less than 2% in the UK, the food chain now includes the agribusiness companies, the retailers, and the entertainment sector. According to the UK Department for Environment, Food and Rural Affairs, in 2014 the food and drink manufacturing sector contributed £27bn to the economy, and employed 3.8 million people.

It is not simple to separate out the contribution that meat production makes to this – particularly globally. The UN Food and Agriculture Organisation states that livestock is about 40% of the global value of agricultural output and supports the livelihoods and food security of almost a 1.3 billion people.

What about animal welfare?

In Britain we’ve been regulating animal welfare since the slightly unfortunately named “Humanity Dick” (real name Richard Martin) got the Cruel and Improper treatment of cattle bill passed in 1822.

But the idea of animal welfare and animal rights remains a hugely controversial one. In 1975 philosopher Peter Singer argued in Animal Liberation that the boundary between humans and animals is completely arbitrary. Although campaign groups such as the RSPCA (founded in the 19th century) had long been trying to improve animal welfare, Singer’s book arguably kicked off the modern animal rights movement.

The result of much campaigning and pressure has been a number of regulations. In 1998 the European commission passed a directive which stated that all animals kept for farming purposes must reflect the “five freedoms” – freedom from hunger and thirst; discomfort; pain; injury and disease; fear and distress, and freedom to express normal behaviour. In 2009 the Lisbon treaty recognised animals as sentient beings.

In 2012 an international group of scientists met at Cambridge University to sign (in the presences of Stephen Hawking) the Cambridge Declaration on Consciousness, which declared that “the weight of evidence indicates that humans are not unique in possessing the neurological substrates that generate consciousness. Non-human animals, including all mammals and birds, and many other creatures including octopuses, also possess these neurological substrates”.

Globally OIE, the World Organisation for Animal Health, has a number of standards.

What about its cultural and social importance?

Cooked meat may have been partially responsible for the large brains that characterise Homo sapiens and have put humans where we are now. Cooking made calories from meat (and from vegetables) easier to consume and absorb than in a raw form.

And the domestication of certain animals – along with the domestication of wild grains and vegetables – marked the beginning of human agricultural history in the “fertile crescent”. Throughout human history the hunting and farming of meat has been part of our stories and mythologies and some of our legal and religious systems; the fatted calf for the prodigal son; the medieval forest laws that created areas where no one but English royalty could hunt; the sacrifical sheep to mark the beginning of Eid Al-Adha; even the roasted wild boars consumed at the end of every adventure by Asterix and Obelix.

But is meat still crucial to human life? Some argue that, just because we’ve always eaten meat, that doesn’t mean we always have to. If we can get all the dietary nutrients and protein that we need elsewhere, should we?

How has meat production changed? 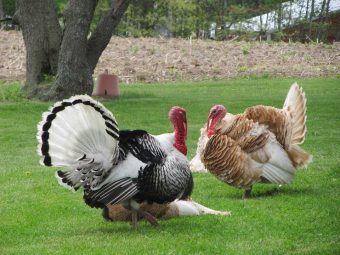 The old-fashioned vision of a mixed farm with wheat and chickens and pigs still exists. More than half of the farms in the US, for example, were small enough in 2012 to have sales of less than $10,000 dollars. But the 20th century saw the application of the principles of the industrial revolution to agriculture – how could inputs be minimised and profits be maximised?

The result was the factory farm, first for chickens, then pigs, and more recently cattle. Producers discovered that animals could be kept inside, and fed grain, and could be bred to grow more quickly and get fatter in the right places. Since 1925, the average days to market for a US chicken has been reduced from 112 to 48, while its weight has ballooned from a market weight of 2.5 pounds to 6.2.

Pig and cattle farming has followed suit. Sows are held in gestation crates for up to four weeks once they are pregnant, and then put into farrowing crates once they’ve had their piglets to prevent them accidentally crushing their young. Industrially reared pigs spend their lives in indoor pens. Cattle farming is now being similarly streamlined, with cows in the last few months of their lives being fattened in feedlots with no access to grass and sometimes no shelter.

What impact does meat have on human health?

There are a number of concerns about the impacts of industrial meat production on our own health, beyond the environmental issues. Bacterial infections that can be transmitted to humans, such as salmonella and campylobacter, can spread through large farms. The ability of these pathogens to enter the environment around farms and slaughterhouses, and to make humans ill, is a major modern worry.

Although there is a problematic shortage of research into the link between antibiotic use in animals and the growing problem of antibiotic resistance in humans, scientists and policymakers agree that it is a significant part of the problem. The volumes here are large: in the US it’s been estimated that 80% of all antibiotics go to farm animals. When Jim O’Neill, the chair of a UK independent review on antimicrobial resistance, published his recommendations for action, reducing unnecessary use of antimicrobials in agriculture was the third item on his list.

What is the environmental impact of our current farming model?

It is extremely difficult to separate out the different impacts of different farming models and types. Many measurements look at agricultural impact without making a distinction between arable v livestock, or industrial v small farms. However, the following information begins to indicate the scale of the problem.

To put these figures into context: the planet faces growing water constraints as our freshwater reservoirs and aquifers dry up. On some estimates farming accounts for about 70% of water used in the world today, but a 2013 study found that it uses up to 92% of our freshwater, with nearly one-third of that related to animal products.

Farms contribute to water pollution in a range of ways: some of those are associated more closely with arable farming, and some with livestock, but it’s worth remembering that one-third of the world’s grain is now fed to animals. The FAO believes that the livestock sector, which is growing and intensifying faster than crop production, has “serious implications” for water quality.

The impacts are wide-reaching. Eutrophication is caused by excesses of nutrients and organic matter (animal faeces, leftover feed and crop residues) – which cause algae and plants to grow excessively and use up all the oxygen in the body of wate at the expense of other species. A review in 2015 identified 415 coastal bodies already suffering these problems. Pesticide pollution can kill weeds and insects away from the agricultural area, with impacts that may be felt all the way up the food chain. And although scientists do not yet have full data on the connection between antibiotic use in animals and rising levels of antibiotic resistance in the human population, water pollution by antibiotics (which continue to have an active life even after going through the animal and into the water) is definitely in the frame.

Land use and deforestation

Livestock is the world’s largest user of land resources, says the FAO, “with grazing land and cropland dedicated to the production of feed representing almost 80% of all agricultural land. Feed crops are grown in one-third of total cropland, while the total land area occupied by pasture is equivalent to 26% of the ice-free terrestrial surface”.

It’s hard to work out exactly what quantity of greenhouse gases (GHG) is emitted by the meat industry from farm to fork; carbon emissions are not officially counted along entire chains in that way, and so a number of complicated studies and calculations have attempted to fill the gap.

According to the UN’s Intergovernmental Panel on Climate Change, agriculture, forestry and other land use accounts for 24% of greenhouse gases. Attempts to pick out the role of animal farming within that have come up with a huge range of numbers, from 6-32%: the difference, according to the Meat Atlas, “depends on the basis of measurement”. Should it just be livestock, or should it include a whole lot of other factors? Different models of farming have different levels of emissions: this has generated an energetic discussion around extensive versus intensive farming, and regenerative farming – a model that aims to combine technologies and techniques to regenerate soils and biodiversity levels while also sequestrating carbon.

What about the giant companies that dominate the sector? A 2017 landmark study found that the top three meat firms – JBS, Cargill and Tyson – emitted more greenhouse gases in 2016 than all of France.

Some argue that veganism is the only sane way forward. A study last year showed, for example, that if all Americans substituted beans for beef, the country would be close to meeting the greenhouse gas goals agreed by Barack Obama.

But there are some alternatives. Reducing the amount of meat you eat while improving its quality is advocated by many environmental groups. But where do you find this meat? The organic movement was founded on the pioneering work of Sir Alfred Howard. It is still relatively small – in Europe 5.7% of agricultural land is managed organically – but influential. There are other agricultural models, such as biodynamic farming and permaculture. More recently some innovators have been fusing technology with environmental principles in the form of agroforestry, silvopasture, conservation farming, or regenerative agriculture to create farming methods which all encompass carbon sequestration, high biodiversity and good animal welfare. A recent study showed that managed grazing (a technique which involves moving cows around to graze) is an effective way to sequester carbon. However, while organic and biodynamic meats have labels, regenerative farming, as yet, does not – so you need to investigate your farmer yourself.