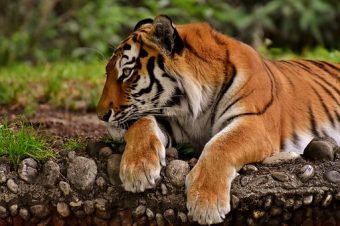 Tigers are one of the world’s most recognized animals. Throughout history they can be seen in cultural traditions across Asia, as well as in brand images and logos the world over. But while they might be omnipresent across our cultural landscape, their actual existence in the wild has been dramatically reduced to only a few pockets of their historical range. Wild tigers are now found in just 10 countries, their historical range shrunk by over 95 percent.

If tigers completely disappeared, we’d be losing so much more than an iconic species…

Tiger habitats overlap nine of Asia’s most important watersheds which supply water to more than 800 million people. Protecting these tiger forests is the most cost-effective way to prevent droughts, reduce flooding, and limit the impacts of climate change.

Protected Areas are proven to reduce deforestation and across Asia tigers are the driving force behind creating and effectively managing protected areas. For example, India recently declared its 51st Tiger Reserve, Srivilliputhur Megamalai, in southern India and this new protected area will safeguard more than 1.000 square kilometers  of key river habitat.

Here in Cambodia, where I photographed the country’s last wild tiger in November 2007. tiger spirits were used by indigenous communities to help regulate the management of forests and wildlife. Harvesting of valuable plants was only permitted in certain times of the year and only after the tiger spirits had been appeased. Failure to adhere would result in wild tigers stalking you in the forest. However, with the extinction of the tiger the spirits have vanished, and the forests become an open free-for-all.

Protecting tigers also protects a multitude of other species

Tiger-protected areas save much of Asia’s amazing wildlife. Take, for example, India’s Manas Tiger Reserve in Assam where tiger populations are increasing. In addition to tigers the grasslands and forests of Manas Tiger Reserve support the only viable global population of the world’s smallest, and rarest pig –pygmy hog – and, my personal favorite, the Bengal florican.

This critically endangered gamebird, which I studied for my doctorate, finds a mate with an elaborate display involving males shooting themselves into the sky before plummeting down kicking their legs as if riding a bicycle. Without tigers, these and many more species would not be as well protected.

A cultural and spiritual icon for millions

There are plenty of examples of mythical animals, such as the unicorn, and extinct creatures, like the dodo and dinosaurs, which remain part of international consciousness. Tigers are a global phenomenon, but unless conservation is successful, they will only be known in zoos or in cultural media. A world without tigers would be economically and spiritually a much poorer place. Let us continue focusing our efforts towards doubling wild tigers and ensuring that this species does not become a vanished cultural icon.