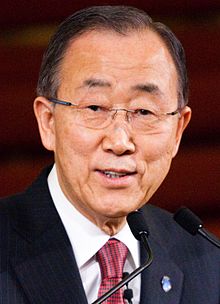 Rallying stakeholders gathered in Marrakech, Morocco, for the United Nations Climate Conference, known as ‘COP 22,’ Secretary-General Ban Ki-moon yesterday urged everyone – “from the local to the global” – including the private sector, cities and civil society, to get involved in the implementation of the Paris Agreement.

“We need everyone. And we need action from the local to the global. Partnerships should focus on results today – and make progress for the long-term. We have no time to waste, and much to gain, by acting now,” Mr. Ban told a High-Level event on Accelerating Climate Action.

The President of COP 22, Salaheddine Mezouar, Minister for Foreign Affairs and Cooperation of Morocco, noted that “without minimizing the eminent responsibility of States,” the contribution of non-State actors serves as a “structuring supplement” to multilateral action against the impacts of climate change.

Last December at the previous Conference, known as COP 21, 196 Parties to the UNFCCC adopted the Paris Agreement, so-named after the French capital where it was approved. It aims to strengthen the global response to the threat of climate change by keeping the global temperature rise this century well below 2 degrees Celsius above pre-industrial levels and to pursue efforts to limit it to 1.5 degrees Celsius.

The Agreement entered into force on 4 November 2016, in time for COP 22, which has been under way since 7 November.

In Paris the next year, two Climate Champions, Laurence Tubiana, French Ambassador for climate change negotiations, and Hakima El Haité, Moroccan Minister for the Environment, were appointed to accelerate joint action on the Agenda.