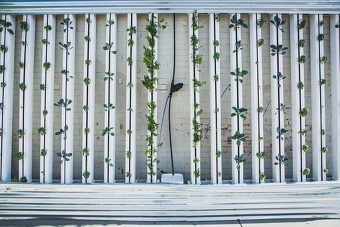 Innumerable layers of vertically stacked crops, growing at insane speeds thanks to the meticulous administration of exactly the right quantities of water, nutrients, and a precise spectrum of light. Vertical Farming has so far been more successful in gaining media attention than in producing food, but this is about to change. Until recently, the only operational vertical farms were small-scale installations in research labs. Facilities aimed at developing the technology were involved, especially in refining the required lighting and climate control equipment. But this year, 2017, appears to usher in the next stage in the development of vertical farming. For the first time, larger scale commercial production is being undertaken.

Vertical Fresh Farms has been farming commercially on a small scale in Buffalo, New York for a few years, but a larger scale commercial facility is currently under construction in the Netherlands. Fruit and vegetables supplier Staay Food Group is erecting a 900 square meter vertical farm, which will have a total cultivation area of 3000 square meters.

Based in the town of Dronten, the facility is producing lettuce for ‘one of the largest supermarket chains of Europe.’ The lettuce is grown using Philips GreenPower LED horticulture lighting technology, and besides tech-multinational Philips, vegetable breeder Rijk Zwaan was involved in the development of the facility. The farm is expected to come online somewhere during the latter half of 2017.

This is good news for the environment because no pesticides are required in the process. Farming happens indoors, preventing any harmful insects or other pests from reaching the plants. Furthermore, vertical farming allows for locating food production closer to, or even in cities, where food consumption is concentrated. As a result, suppliers can save on transport emissions as well as on transport costs. The farm in Dronten packs the lettuce on location, which reduces the shipment distance even further.

The Dutch commercial facility is not the only sign that vertical farming is on the rise. Aerofarms in Newark, New Jersey, is currently bringing online the largest vertical farm in the world, with expected harvests of up to 2 million pounds a year. In Shanghai, plans have just been released for a massive 250-acre city farm, on which construction should start in 2018.

This growth of the vertical farming sector appears to be driven by two key components: an increasing demand for organic, pesticide-free food, and innovation, especially in the power consumption of the LED-technology required to grow indoors. A report by PS Market Research forecasts that the market for vertically farmed food will grow rapidly in the coming years. Their calculations give $6.4 billion of total revenue by the year 2023.