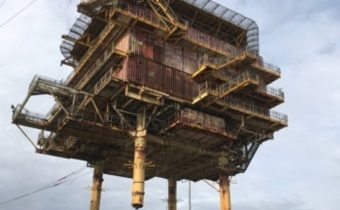 Veolia-Peterson is gearing up to recycle a former Shell offshore oil rig, after the top platform of the structure arrived for decommissioning in Great Yarmouth yesterday.

The company, a joint venture between resources firm Veolia and logistics specialist Peterson, has accepted the topside of the Shell Leman BH platform accommodation block into its decommissioning facility at the harbour. The supporting 50m-high steel jacket structure is set to follow later in July.

The offshore accommodation block was previously used as living quarters for Shell oil workers at the Leman BT and Leman BK drilling rigs, located around 50km from the Norfolk coastline.

Alongside the supporting steel jacket structure it comprises around 1,600 tonnes of material and assets, of which the Veolia-Peterson partnership has a target of recycling or reusing 97 per cent under a contract awarded by marine dredging specialist Boskalis.

It is the first offshore structure accepted into the partnership’s Great Yarmouth decommissioning facility, and the two firms expect operations and staff numbers to expand as further opportunities to recycle decommissioned offshore structures increase in the Southern and central-North Sea in the coming years.

The UK government has said it hopes that the UK can become a world leader in oil and gas industry decommissioning as rigs that have operated in the North Sea basin are retired over the coming years.

Estelle Brachlianoff, senior executive vice president at Veolia UK and Ireland, said former oil rigs and other offshore structures represented valuable assets that could be given a second-life through decommissioning and recycling their parts.

“This latest project will continue to show how we can maximise the recycling of these platforms and drive sustainability in the industry,” she said. “Our partnership has successfully delivered a number of projects over the last ten years, this latest one will further the growth of the business and local opportunities in Great Yarmouth.”

The Veolia-Peterson partnership claims it has to date recovered more than 80,000 tonnes of offshore materials through decontamination, deconstruction, and recycling of former sea platforms.

Peterson’s regional director Ron van der Laan said the project would “build on the successes achieved so far and represents a further step towards establishing Great Yarmouth as a centre of excellence”.

The news follows the announcement last week that Swedish energy firm Vattenfall is in negotiations with Peel Ports to establish a new base at Great Yarmouth to support its Norfolk offshore wind farm projects.