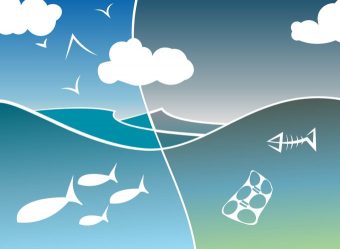 Nations from around the world have agreed a new UN resolution to halt the tide of ocean plastic that scientists warn is poisoning global waters.

The agreement acknowledges the urgent need to curb the flow of ocean plastic pollution and sets out plans for an international taskforce to advise countries and businesses on how to tackle the problem.

Ministers at a UN Environment Assembly in Kenya are set to seal the agreement later today.

The move followed a statement from the UN’s ocean chief Lisa Svensson yesterday, who declared the problem to be a “planetary crisis” which is ruining the seas.

It was the latest in a series of stark warnings on the fragile state of the world’s oceans.

Renowned naturalist Sir David Attenborough is to raise the alarm on the health of the world’s oceans in the final episode of Blue Planet, which will air later this week. The final episode was dedicated to covering the damage being wreaked in seas around the globe by climate change, plastic pollution, and overfishing.

Earlier this year the UN launched the Clean Seas campaign, to encourage more action against marine plastic litter from governments, the general public and civil society. The five-year campaign aims to “transform habits, practices, standards and policies around the globe to dramatically reduce marine litter and the harm it causes”.

However, according to BBC reports the new UN resolution is not legally binding and sets no time-bound targets, after the US refused to agree to specific international goals.