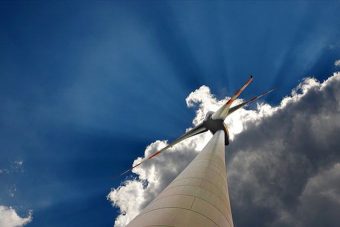 The UK’s climate targets are at risk if the government does not reverse its decision to end support for windfarms, the head of one of the Big Six energy companies has warned.

Keith Anderson of ScottishPower said onshore wind power should be opened up to the government’s new subsidy regime because the technology could be deployed quickly, help energy bills and cut carbon emissions.

The government will end existing subsidies for new onshore windfarms from April next year, leading the utility rushing to complete eight projects that already had planning permission, all in Scotland. The Spanish-owned company is currently putting up turbines at a rate of almost one a day.

“Our view would be if you want to hit your climate change targets you need onshore wind, otherwise you’re going to struggle to hit them and it’ll cost you significantly more money,” said Anderson.

In an interview with the Guardian he called on ministers to open up windfarms in Scotland to contracts for difference, which pay operators a guaranteed top-up above the wholesale price of energy. “Where we are in the energy sector as a whole right now, nothing is being built without some sort of mechanism or support,” he said.

The UK’s statutory climate advisers say that, while technically the UK’s carbon budgets could be met without onshore wind, doing so without it would be more expensive because it was so cost effective. Constraints on it would “necessitate deployment of more costly technologies and increase the cost of decarbonising the power sector,” the Committee on Climate Change said in the summer.

Analysts at Bloomberg have said that wind power is already the cheapest form of new power in the UK, and Anderson said that more onshore wind would be essential to keep energy bills down. But he said it was “extremely doubtful” the company would build any new onshore wind without support.

While he said he understood the Conservatives had a manifesto pledge to end subsidies for onshore wind due to some local opposition in England, there was no reason the contracts for difference could not be opened to future windfarms built in Scotland, which has a target of sourcing 100% of its electricity from renewables by 2020.

“If you lower the level of support what you do is drive people looking for the windiest and most productive sites – you will tend to find those north of the border. Developers like us are naturally shifting and focusing on Scotland,” he said.

The turbines the company is erecting now are mostly expansions of existing windfarms, and will add 474MW of capacity, or enough to power 287,000 homes. ScottishPower has built around 1,600MW of onshore wind in the past two decades.

“The Committee on Climate Change, their [the government’s] own advisors, say if we are to stand any chance of meeting our climate change targets we need to at least double our renewable energy capacity. So it’s vital that the UK government tells us what the future of onshore wind is going to be and that they simply allow it to compete in that energy market.”

A spokesman for the government did not address the question of opening up subsidies to onshore wind but said: “We are fully committed to providing secure, affordable and clean energy for the UK’s homes and businesses.”

“The renewables industry has been a strong success in Scotland thanks to UK government support. Last year we invested a record £13bn in renewables across the UK, with Scotland continuing to benefit significantly from that support.”

A poll last month found most people underestimate the support for onshore wind power, which is backed by 73% of the British public.