Neil Pederson’s introduction to tree rings came from a “sweet and kindly” college instructor, who nevertheless was “one of the most boring professors I’d ever experienced,” Pederson said. “I swore tree rings off then and there.” But they kept coming back to haunt him. 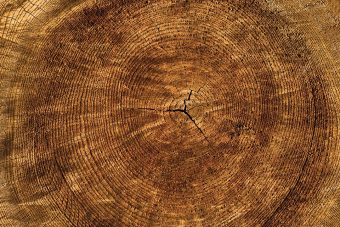 As a future forest ecologist, he needed to learn more about the history of forests. So he read countless articles in graduate school extolling the importance of tree rings in unraveling a forest’s past. Ultimately, “I fell in love with the beauty and wealth of information found in tree rings,” he said. “Since then, tree rings have revealed to me the absolute resiliency of trees and forests. I’m hooked.”

Today, he and his colleagues are using the data inherent in these ancient sources of nature to better understand the impact of climate change and carbon dynamics on forests, all the more valuable because data from long-lived trees can reach back decades, even centuries. This is far longer than modern satellite imagery, carbon dioxide measurements, and computer models, whose high-tech information gathering only stretches back about 30 years.

“What tree rings can do is enhance those records,” Pederson said. “The satellite record…represents a small portion of the life of a tree, let alone the ‘life’ of a forest. Further, it only captures the weather ‘norm’ for a region and, as we are learning, climate varies over time. The weather norms or averages on your nightly weather reports are based on 30-year means. So, while satellite records are good at covering space, they might be limited in what they can tell us about forests due to shortness of these records.”

Pederson, now a senior ecologist with Harvard University’s Harvard Forest, a 4,000-acre research site, along with Laia Andreu-Hayles, an associate research professor at Lamont-Doherty Earth Observatory of Columbia University, and Mathieu Levesque, research leader of the forest management group at ETH Zurich, analyzed tree rings to determine if the information they gleaned matched the accuracy of high-tech equipment. They wanted to know whether the rings could serve as a proxy for learning more about carbon storage and climate change in forests over the long-term, and found that they could.

Forests serve as important carbon “sinks,” absorbing planet-heating carbon dioxide that has been released into the atmosphere by the burning of fossil fuels. But little is known about exactly how much carbon is stored in forests now, or in the past, and scientists are only in recent years learning about the past effects of climate change.

The scientists examined ring samples from two widespread species — tulip poplar (Liriodendron tulipifera) and northern red oak (Quercus rubra) — growing in three climatically different regions of the eastern United States, then analyzed the carbon and oxygen molecules — or stable isotopes — stored in them. They compared them to estimates obtained from satellites, and found strong agreement each year, and over time. No trees were destroyed to obtain the rings, by the way. Rather, scientists remove an increment core for each sample, each slightly narrower than a pencil.

“Our study is the first to compare stable isotopes from tree rings with the latest generations of productivity estimates from satellites,” Levesque said. “We took advantage of the newly developed satellite data, and this is the main novelty of our study.”

Their findings appear in the journal Nature Communications.