At least three companies are hoping to bring supersonic airplanes back into the skies, but environmental groups worry their return could mean a big increase in greenhouse gasses from aviation. 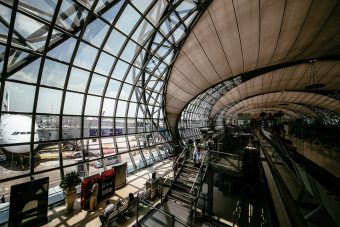 The issue is expected to come to the fore next week as international regulators meet in Canada beginning Monday to discuss environmental and noise standards for the newly-revived supersonic transport technology.

The International Council on Clean Transportation  released a study on the climate impacts of creating a new commercial supersonic network Wednesday in anticipation of the meeting.

Supersonic jets fly faster than the speed of sound and at higher altitudes. The jets could fly from Paris to New York in three and a half hours, less than half the eight hours a conventional commercial jet would take.

British Airways and Air France ran Concorde supersonic service from 1976 until 2003, when it was discontinued in part because of low sales caused by the high cost of tickets, as well as concern over a 2000 accident that killed 113 people.

Now at least three startups are working on bringing supersonic transportation back, including the commercially-focused Boom Supersonic and two others working on business jets, Spike Aerospace and Aerion Supersonic.

The Committee on Aviation Environmental Protection of the International Civil Aviation Organization, a United Nations group, will meet in Montreal to discuss standards for supersonic aircraft, which haven’t flown commercially for 16 years.

The aviation industry has set a goal of reducing its carbon dioxide emissions by half in 2050 compared to 2005 levels, a level that’s already expected to be difficult to meet, said Dan Rutherford, director of aviation programs at the International Council on Clean Transportation.

“Adding these planes, which could be five to seven times as carbon intensive as comparable subsonic jets, on top of that just to save a few hours flying over the Atlantic seems problematic to me,” he said.

That’s an issue as the world attempts to diminish the carbon dioxide it emits to stave off the worst effects of climate change.