More than 1,000 square feet of plastic ultimately destined to pollute the ocean is getting a second lease on life in Rotterdam. On July 4, 2018, Recycled Island Foundation opened its prototype to the public: a floating park made entirely from recycled plastic waste and appropriately named the Recycled Park. 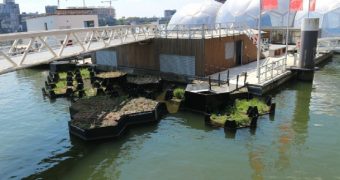 According to a report commissioned by the Dutch Ministry of Infrastructure and Environment, more than 1,000 cubic meters of plastic waste is transported every year down the Meuse River and into the North Sea. The plastics come from landfills, agriculture, sewage and inland shipping. They ultimate reach the river through a number of methods, including dumping, littering and run-off.

Instead of letting the plastic reach the ocean, the Recycled Island Foundation and 25 partners created the Recycled Park: a public space in Rotterdam consisting of floating platforms made from recycled plastic waste. The team set traps along the Meuse River that collect waste, which is then gathered and transformed into platforms for the floating park.

The Recycled Park project is focused on the Meuse River because of the overall viability of plastic in the aquatic space. The collected waste is newer than in other waterways, so it can easily be made into platforms. To create the platforms, the collected plastic is sent to Wageningen University, which leads the research on effective recycling techniques. From there, the platforms are designed with HEBO Mariteimservice, who removes the garbage from the water.

But the platforms aren’t just designed to reduce plastic pollution — they also serve as a wildlife habitat. Plants grow both above and below the river surface, allowing greenery to thrive on top of the platforms, providing a habitat capable of sustaining marine life and encouraging fish to lay eggs below the platforms.

With the prototype park open, the organization is now looking for expansion options. Its ultimate goal is to incorporate several aquatic platform types into the park, while finding a permanent location to collect plastic from the Dutch harbor.