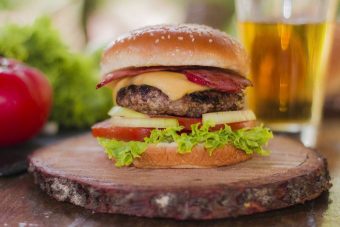 The meat and dairy industry now produces more greenhouse gas emissions worldwide than the transportation industry. For a chance to stave off global warming, we need to radically change how we produce and consume meat.

The burger you ordered for lunch might actually be a bigger problem for the environment than the gas-powered car you drove to the restaurant.

While the world is combating the problem of “big oil” by transitioning to electric cars and renewable sources of energy, the carbon emissions of “big meat” — the companies producing the lion’s share of the world’s consumable meat — haven’t spurred the same kind of widespread action.

According to a recently published report from GRAIN, the Institute for Agriculture and Trade Policy (IATP), and Heinrich Böll Foundation, just three meat producers — JBS, Cargill, and Tyson — generated more greenhouse gases in 2016 than the entire nation of France. These emission levels rival those of Exxon, BP, and other major oil companies.

The combined emissions of the top 20 meat and dairy companies surpass those of Germany, the largest polluter in all of Europe, and if these companies were a nation, they would be seventh in the list of global greenhouse gas emitters.

Livestock production now accounts for almost 15 percent of the world’s greenhouse gas emissions. As Shefali Sharma, director of IATP’s European office, told Futurism: that’s even more than transportation, and the impact on our environment could be catastrophic.

“Without addressing this massive growth in industrial meat and dairy, we are headed towards global warming that is untenable for humans,” she said.

According to some experts, while buying an electric car instead of a gas-powered one may not be a life-changing event, converting to a completely meat- and dairy-free diet would be.

Thankfully, the entire world doesn’t need to go vegan to combat the environmental problems caused by “big meat.” However, individuals, companies, and governments will need to be ready to make some major changes.

“If we are serious about dramatically cutting down our global greenhouse gas emissions to levels that can sustain humanity, then we will have to radically shift the way we produce and consume meat,” said Sharma.

The people who eat the most meat and dairy live in rich countries or belong to the middle and upper classes in developing nations. They are actually hurting themselves by over consuming these products, causing an increase in rates of obesity and non-communicable diseases.

Switching to fake meat grown in labs could help sustainably satisfy the world’s appetite for meat, so long as it’s healthy and production isn’t monopolized by just a few large corporations, said Sharma.

Another way individuals can spur change is by contacting their government representatives, Sharma told Futurism. They can demand that these representatives support better regulation of “big meat,” fighting against the financial incentives and trade deals that help these companies expand.

Sharma also suggests people ask that public funds be redirected away from the meat and dairy industry and toward small producers, or seek out locally produced meat themselves. This will enable these producers to do more than break even on their costs, while consumers will benefit from good quality, healthy food that won’t destroy the environment.

A tax on meat similar to those on tobacco and sugar could help as well, though Sharma said it must be implemented in a way that targets corporate abuse by large producers and doesn’t hurt the poor or farmers.

Ultimately, change starts on the individual level, so unless you like your burger served with a side of environmental destruction, try looking for a diner that serves locally sourced beef for your next lunch.