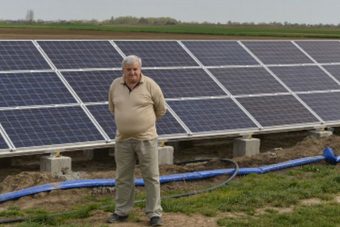 Droughty, hot, summer day will no longer worry Marko Čarnić, vegetable grower from Begeč, near Novi Sad. From now on the sun also works for Čarnić, who is one of the biggest manufacturers of carrots not only in Serbia but also in the region. Part of his tilths seeded with carrots, is watered by an irrigation system which is run by solar energy. This system is the first of its kind in Serbia.

While pointing to the system of 27 solar panels which are placed next to the main road, Marko Čarnić explains that he cultivates around 200 acres on which carrot occupies the biggest part almost 120 acres. 7,000 tons of carrot is produced for sale annually. Vegetable crops are stored in a modern cold storage, recently built, whose capacity is 6,000 tons.

– Truth to be told, I never feared the drought, because all my fields are covered by irrigation systems driven by diesel generators – said Čarnić.

– However, I contemplate this system as an investment into the future. It will show the effects for more than 20 years, since it achieves significant savings especially in fuel. Thus, we become more competitive, and that is very important now when we will face the reduction of customs protection and the arrival of EU products on our market.

Marko Čarnić explains how the investment of 28,000 EUR pays off for a maximum of three years. He had a maximum support of ProCredit bank in financing and also in finding a company that is engaged in designing and installation of solar irrigation system run by solar energy. For the time being, this system waters 6 acres of land, but very soon it will be extended to the neighbouring field, so that it will cover the total of 14 acres.

Janko Medveđ, his colleague, is also a major producer of carrots also from Begeč. He grows this vegetable on about 130 acres, and he is also thinking about setting up this kind of a system, but he has certain dilemmas.

– The biggest problem would be its mobility – said Medveđ.

– In order to have good results, I need to respect the crop rotation, that is, I cannot grow only vegetable crops that do not require irrigation. Therefore, it would be priceless if I could move it, but anyway I will see what will Marko’s experience be like and then I will decide. Irrigation system, which Čarnić has installed and whose power is 7,5kW can pump out 500 cubic meter of water a day. Each system is specially designed depending on the needs of the farmer and it can be controlled remotely via the Internet connection.  The panels are resistant to impacts, and the entire system requires minimal investment in maintenance in the next 25 years.

This story was originaly published in Energetski portal bulletin “Renewable Sources of Energy 2016“, in June 1st 2016.