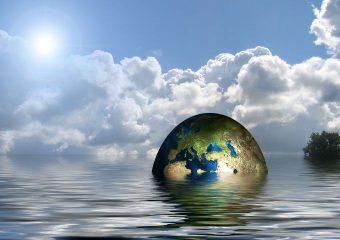 In case your week was going well so far, we’re here to bring you calmly crashing back down to Earth again.

Now we’ve been reassured that this news is nothing to lose sleep over, but you might want to take a few deep breaths.

It turns out that the Earth’s atmosphere is slowly leaking oxygen in a “clear trend” and scientists don’t really know why.

In fact, atmospheric oxygen levels have dropped 0.7% over the past 800,000 years, which scientists had not predicted happening.

Princeton University geologist Daniel Stolper said: “We didn’t know whether oxygen would be going up, down, or flat. But it turns out there is a clear trend.”

Although oxygen levels have fluctuated over the history of the planet, given enough time that leak could make the planet uninhabitable.

And let’s not forget that by burning carbon, we are making things worse for ourselves: “We are consuming oxygen at a rate a factor of a thousand times faster than before. Humankind has completely short-circuited the cycle by burning tons of carbon,” said Stolper.

Scientists were able to measure oxygen levels by looking at ice cores in Greenland and Antarctica that have trapped air bubbles from the past million years.

They offered a couple of reasons that this might be the case: long-term climate change and the erosion rates of the ice – which causes more fresh ice to be exposed and oxidised, causing more oxygen to be consumed.

The team says that this decline is consistent with changes in weathering fluxes of organic carbon, which are driven by either: “Neogene cooling or increasing Pleistocene erosion rates”.

They’ve got it under control.