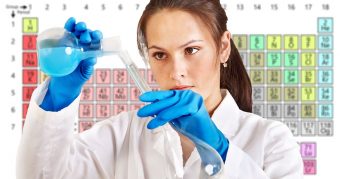 The average smartphone is made up of about 30 chemical elements. But at least half of those elements could be in danger because of increasing scarcity. Now, scientists from the University of St Andrews have developed a new, unique periodic table that highlights the “90 natural elements that make up everything.” The table also focuses on the scarcity and vulnerability of elements that we use in our devices like smartphones and televisions.

In the European Union alone, more than 10 million smartphones are discarded every month, and they are often not recycled properly. So the chemical elements that make up cell phones are now on an “endangered list” created by The European Chemical Society (EuChemS).

This new periodic table was launched this week at the European Parliament by British MEPs Catherine Stihler and Clare Moody. The event is also celebrating the recent discovery at the University of St Andrews of the oldest known wall chart of the periodic table.

The biggest concern about the elements that make up our smartphones is increasing scarcity from limited supply, their location in areas of conflict and our inability to recycle them.

Because of the limited resources, some are questioning the practice of upgrading cell phones every two years. EuChemS is hoping that shining a spotlight on the lifespan of the elements that make up our devices will promote better recycling and reuse practices.

“It is astonishing that everything in the world is made from just 90 building blocks, the 90 naturally occurring chemical elements,” said David Cole-Hamilton, EuChemS vice president and emeritus professor in chemistry at the University of St Andrews. “There is a finite amount of each, and we are using some so fast that they will be dissipated around the world in less than 100 years. Many of these elements are endangered, so should you really change your phone every two years?”

Stihler said it is fascinating to see the periodic table updated for the 21st century while celebrating the 150th anniversary of the classic periodic table. But she said it is “deeply worrying” to see the number of elements that are endangered, and it is a lesson for all of us to care about our planet, because these elements will not last forever.