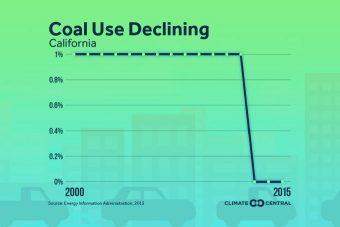 Since Climate Central first report on climate-friendly cars in 2013, the options for low-emissions vehicles have grown. The continued shift away from coal as an electricity generating source has made electric and plug-in hybrid cars a greener choice in some states.

But just how climate-friendly these cars are depends on three main points:

Where you live: How electricity is generated varies from state to state. Some states produce electricity that is less carbon intensive than others.

The type of car: Some cars are more efficient than others, which is true for electric cars, hybrids, and those powered by gasoline or diesel fuel.

How far you drive: the more miles you drive, the higher your emissions.

Since 2012, 39 states have seen a decrease in coal for electricity generation. That difference has been made up using natural gas, wind, solar, nuclear, and other sources. States where electricity generation still comes mostly from coal include Kentucky, West Virginia, and Wyoming. In these states, an efficient gas-powered car is still the best option for the environment, with more than a dozen gas-powered cars on the market being more climate friendly than the best electric car.

As a result, operating an electric car less than 50,000 miles may actually be less climate friendly than running its gas-powered counterpart for the same distance. Using that shorter lifecycle, there are only 31 states where an all-electric car is the most climate-friendly option for consumers. In the other 19 states, a gas-powered hybrid is the most climate-friendly option.