The summer of 2018 is shaping up to be one for the record books. Locations across the Northern Hemisphere have recorded their hottest temperatures ever this past week, the Washington Post reported Wednesday. While the Post points out that no single heat record can be linked to climate change, this summer’s high temperatures follow a trend of record-setting years and open a window into what will be the new normal if we don’t act quickly to reduce greenhouse gas emissions. 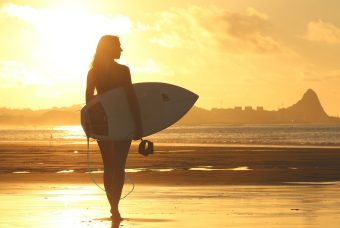 Records were set across the U.S. as people prepared to kick off summer with outdoor Fourth of July celebrations. Denver tied its record of 105 degrees Fahrenheit on June 28, but while temperatures soared across the nation, it was the usually mild New England that broke the most records. On July 1, both Mount Washington, New Hampshire and Burlington, Vermont tied and set their highest low temperatures of 60 degrees and 80 degrees respectively, according to the Washington Post.

The U.S. wasn’t the only country where typically milder climes faced scorching heat. In Canada, Montreal recorded its highest temperature since it began keeping records 147 years ago. Thermometers rose to 97.9 degrees on July 2, and the city also suffered its most extreme midnight combination of humidity and heat. The heat wave in Eastern Canada has turned deadly, killing at least 19 people in Quebec, 12 of them in Montreal, RTE reported Thursday.

“My thoughts are with the loved ones of those who have died in Quebec during this heat wave. The record temperatures are expected to continue in central & eastern Canada, so make sure you know how to protect yourself & your family,” Canadian Prime Minister Justin Trudeau wrote on Twitter, according to RTE.

To the west, Ottawa also recorded its most extreme heat and humidity combo July 1 but RTE said no deaths have been reported in its province of Ontario.

Eastern Canada is expected to see some relief Thursday and Friday as temperatures fall, but it can expect more of the same in years to come.

“All the predictions illustrate that going forward in Canada, things are going to be hotter, wetter and wilder,” University of Waterloo climate scientist Blair Feltmate told Global News. “It’s not any particular year that matters. What matters is the overall, the long-term trend.”

Across the Atlantic, a heatwave in the United Kingdom also broke records. Scotland has provisionally announced its highest ever temperature of 91.8 degrees in Motherwell on June 28 and Glasgow recorded its hottest day of 89.4 degrees. Shannon, in Ireland, recorded its hottest day of 89.6 degrees, and in Northern Ireland, Belfast and Castlederg both broke their records of 85.1 degrees on June 28 and 86.2 degrees on June 29 respectively, the Washington Post reported.

The UK heatwave, which began two weeks ago, is expected to persist for two more. It is already causing wildfires in Wales and putting agriculture at risk, the Independent reported Thursday.

“It could be a bad summer for dairy farmers, with the National Farmers Union (NFU) warning that in many areas the grass has stopped growing, crops are ripening too early and milk yields and animals’ winter food supplies could be hit,” the Independent wrote.

Temperatures in Eurasia and the Middle East are also spiking. Tbilisi, the capital of Georgia, broke its record July 4 when temperatures reached 104.9 degrees. The Armenian capital of Yerevan tied its record of 107.6 degrees on July 2, also breaking its record for July. Parts of southern Russia also tied or broke records June 28, according to the Washington Post.

Finally, Quriyat, in Oman, broke the world’s record for hottest low temperature with a whopping 108.7 degrees recorded the night of June 26.