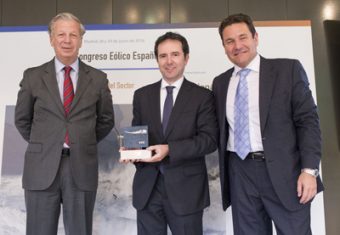 The Spanish Wind Energy Association (AEE) awarded Dr Fatih Birol, the IEA’s Executive Director, its Annual Distinction in recognition of the IEA’s work in promoting renewable energy in Spain and across Europe. In a statement announcing the award, the AEE recognized efforts by the IEA and Dr Birol at highlighting the fact that renewable are no longer a niche and should now be considered a conventional source of energy.

In the Opening Session of the Spanish Wind Power Congress, Keisuke Sadamori, IEA Director of Energy Markets and Security, delivered a keynote speech on recent developments in wind and other renewable energy markets, integration challenges and necessary policy measures to ensure renewable growth in line with Paris Agreement ambitions. Mr Sadamori also expressed his appreciation for the award to Dr Birol as recognition of IEA work in renewables.

Later in the day, Dr Paolo Frankl, head of IEA’s Renewable Energy Division, accepted the award on behalf of Dr Birol. “This award represents a further stimulus to accelerate the modernization process of the IEA initiated by Dr Birol,” said Dr Frankl, “and more specifically to further expand our efforts in system integration and renewable policy assessment.”

Previous recipients of the award include US President Barack Obama and Christiana Figueres, Executive Secretary of the UNFCCC.