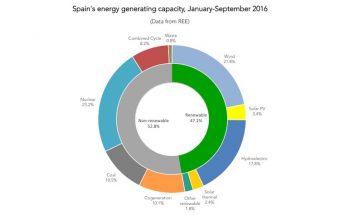 The remaining 52.8 percent of the generation mix was made up by a variety of non-renewables, including: nuclear power (23.2 percent) and coal (10.5 percent).

Demand over the same period on the Spanish peninsula from the population of 47 million was estimated at 167,133 GWh.

The top renewable source, wind power, generated 3,630 GWh, in the month of August — an increase of 12.2 percent over the previous year, and 17.6 percent of total production that month. For some time now, Spain has held the second highest wind power capacity in Europe — over 23 GW.