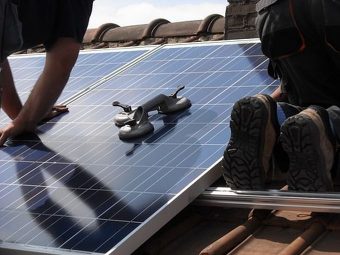 The amount of new solar power capacity installed worldwide rocketed by 50 per cent last year, driven by increasing demand from both the US and China, according to new data.

Led by China, Asia’s solar market share reached more than 66 per cent in 2016, while US demand for new solar capacity was more than twice as large as that in Europe.

China was the world’s largest solar market in 2016, officially adding 34.2GW – over 125 per cent more than in 2015. It was followed by the US with estimated solar power additions of 14GW, up from 7.3GW the year before. Japan was ranked third, reaching around 8.6GW, ahead of India with 4.5 GW.

European installations of solar power, meanwhile, fell by more than 21 per cent to 6.7GW last year, the figures show, despite solar energy prices continuing to fall to their lowest level across much of the continent.

According to SolarPower Europe German PV tenders show average solar power prices have fallen by around 25 per cent in just 18 months, and solar is now one of the lowest-cost power generation sources in available.

Jamie Watson, CEO of SolarPower Europe, warned the EU is now in danger of being eclipsed by Asian and US powerhouses on both solar power production and installations.

The EU is currently proposing a target of sourcing at least 27 per cent of electricity from renewables by 2030, but the trade body believes a more ambitious target of 35 per cent would boost solar growth.

“Southern European countries could generate solar power at around €0.3 per kWh in 2017/18 – that’s a level hardly any other technology can meet, but we need a reliable governance system to steer investment into solar power plants” added Michael Schmela, executive advisor and head of market intelligence at SolarPower Europe. “With the Clean Energy Package for all Europeans, the EU has the chance to make its energy supply fit for the future.”

Rebecca Williams, energy specialist at WWF-UK, said the huge annual growth in solar capacity showed renewables are becoming mainstream and leading the way in global energy production as fossil fuels are phased out.

However, she said the UK government needs to increase its support for the domestic renewables sector, following significant cuts to solar subsidies in 2015. “Despite policy uncertainty in the UK, and cuts in solar panel subsidies, we have created a world leading renewables sector which will bring massive economic and export opportunities to the whole country,” Williams said. “The UK government needs to further back the renewable sector by setting out an ambitious plan to reduce our emissions so that the UK meets its carbon targets.”