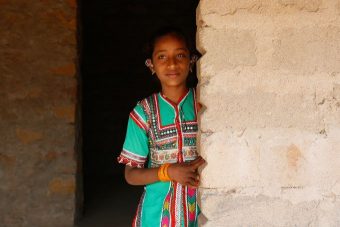 A vast majority of India’s salt comes from Gujarat’s Little Rann of Kutch desert. Here, about 43,000 salt farmers, mostly women, work in brutal heat to produce salt from briny tidal water. It is hard work for little pay. Most of these salt farmers barely earn enough to support their families. But a new effort to bring solar energy to the salt flats is helping lift these rural women and their families out of poverty and into India’s clean energy future.

Salt farming is the only source of income for the local Agaria community, where children start typically working on the salt farm at age 10 and have little education. During the dry season, salt farmers pump briny groundwater out over the salt flats, and coax out the salt using rakes and rollers over the next few months as the water evaporates. The pumps are typically diesel-powered, meaning most salt farmers have to set aside 40% of their meagre earnings to purchase diesel fuel for the following year. The yearly fuel expenses keep these women and their families in poverty.

The Agarias use the power of the sun to help dry the salt— but today, they can also use it to operate their pumps, avoiding the expense and pollution of diesel.Over the past three years, the Natural Resources Defense Council (NRDC), working closely with India’s Self Employed Women’s Association (SEWA) and other partners, has helped design a program to bring more than 500 solar-powered water pumps to salt farming families in the Rann of Kutch. The pumps have proven to be more efficient and reliable than diesel pumps, and save time and money for the hard-working farmers.

I met one of these families recently when I visited India, a multi-generational crew who all worked together in the salt marsh. Thanks to a system set up by NRDC and SEWA experts, they were able to obtain a solar pump through a low-cost loan a few years ago. The pump has been so successful they’ve already paid back their loan and want to buy one more. I asked the matriarch what she was doing with all the money they were saving and she laughed, gesturing to her grandchildren. “It’s all for them,” she told me, “what else?”

NRDC-SEWA research showed that salt farmers who switched from diesel to solar-powered pumps saw their savings increase more than 150%. Today, as prices for pumps have fallen substantially and the price of diesel has increased, farmers who make the switch could save even more. The new pumps allow families like the one I met to have more economic independence, to do things like send children to school. 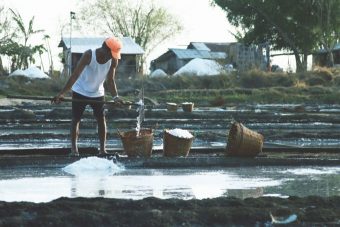 Climate pollution from diesel is a serious concern as well. Millions of Indians are vulnerable to the more frequent and intense heat waves, flooding and drought caused by climate change. An analysis by NRDC and SEWA estimates that replacing diesel water pumps in the Rann of Kutch with solar and hybrid solar/diesel water pumps can potentially avoid as much as 115,000 tonnes of carbon dioxide (CO2) emissions per year. That is the equivalent of taking more than 24,000 cars off the road.

NRDC and SEWA’s work has allowed salt farmers to demonstrate a solid track record of paying back their loans, which should open the door for commercial banks to make more solar loans available to thousands of salt farmers who still use diesel pumps. But the story doesn’t end in the deserts of Gujarat. The financing models and other lessons learned from this project can be applied to communities across India. By developing new methods of clean energy financing, India can greatly expand clean energy access and build a clean energy economy that will benefit millions of people.