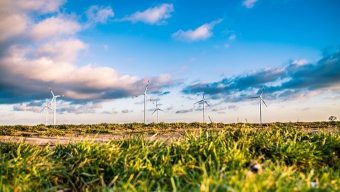 Newly anointed Siemens Gamesa has completed the installation of five 6-megawatt turbines on floating foundations in Stord, Norway, to be then towed to Scottish waters to be installed at what will then be the world’s largest floating offshore wind project, the 30 megawatt Hywind Scotland.

Siemens Gamesa, the newly minted company arising out of the merger between the two company namesakes, which was finalized back in April, announced this week that it had completed the installation of five 6 megawatt (MW) wind turbines atop floating foundations. The completed turbines will now be towed to Scottish waters, where they will be installed 25 kilometers off the coast of Peterhead in Aberdeenshire, Scotland, at water depths between 90 and 120 meters, becoming the 30 MW Hywind Scotland floating offshore wind farm, the largest in the world.

“Siemens Gamesa views the floating wind farm market area the same way as we did with offshore wind farms in the early beginning: it is a very interesting area that is initially a niche market,” said Michael Hannibal, CEO of Offshore at Siemens Gamesa Renewable Energy. “This niche may, however, develop over time into a large market. It is a niche in which we would like to build a strong position for this reason.”

The Scottish Government approved Hywind Scotland back in November of 2015, at the same time that developer Statoil announced its final investment decision to build the project.

“Our objective with the Hywind pilot park is to demonstrate the feasibility of future commercial, utility-scale floating wind farms. This will further increase the global market potential for offshore wind energy, contributing to realising our ambition of profitable growth in renewable energy and other low-carbon solutions.”

Earlier this year, Abu Dhabi’s renewable energy company, Masdar, announced that it had acquired a 25% stake in the Hywind Scotland project.

The Siemens Gamesa floating wind turbines are built onto ballast-stabilized foundations that will then be anchored to the seabed with mooring lines. Currently, the average traditional offshore wind farm is built in water depths between 20 and 30 meters (according to Fraunhofer IWES). While, strictly speaking, the further you get from shore the deeper the seabed gets, this is not always true, and developers have been able to move further from shore while finding water depths in the sweet spot. Nevertheless, this still restricts the consistency and strength of offshore winds, placing a natural cap on the efficiency of traditional offshore wind farms.

However, floating offshore wind farms — as exampled by Hywind Scotland, which will be installed in waters between 90 and 120 meters — are able to go out further, without worrying as much about seabed depths (they still have to be moored to the seabed). This allows for lower installation costs, as there is no need to be building concrete foundations, and opens offshore wind farms up to more consistent and stronger winds.