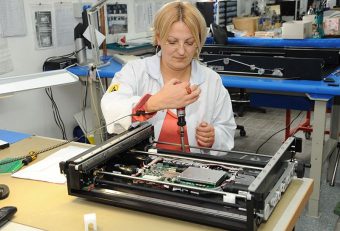 After the well-rounded process of General Electric Sourcing Day, the company included a local company – Unimet, into its chain of suppliers. Domestic company Unimet in first phase of cooperation will deliver their 5 types of mechanical products to GE Power factory in Hungary with gradual potential for delivering to other GE Power factories in Europe and in the world. Unimet was the first one to be qualified by GE after the GE Sourcing Day thanks to its high quality of production, financial stability in business, high EHS standards and competitive price of products. Increasing cooperation between Unimet and GE has achieved assumptions for empowering local companies and tendency of increasing export from Serbia.

„Our process of inclusion of new suppliers into the GE procurement system is not quick but it provides great potential for the development of suppliers as part of the procurement system,“ stated Gaetano Massara, CEO at General Electric South East Europe, during the meeting with Minister of State Administration and Local Self-Government Ana Brnabic.

“It is very important for us that our project which was launched in 2015 in cooperation with relevant state institutions showed results and that by establishing cooperation with Unimet we included a goodcompany from the Serbian market into our chain of suppliers. It became evident during the process of expansion of the chain of suppliers that this market has many SMEs that have production potential, quality of work and prices that are competitive in the demanding global market. Unimet is one of the 70 companies which showed to have the potential to meet our top operating criteria regarding the quality of products, production volume, price and terms of delivery. We believe that we will see other Serbian companies in our chain of suppliers in the future,” Gaetano added and also thanked the Ministry of State Administration and Local Self-Government, Ministry of Economy, Chamber of Commerce and Industry of Serbia and NALED for their cooperation during the implementation of the project.

“Being one of the GE’s suppliers is equal to having an international mark of quality. I am certain that Unimet will be a reliable partner to GE and believe that this cooperation will expand in the future. This is a positive sign for Serbia, because the partnership with GE leads us directly to the demanding international market. This proves that domestic companies can, with the quality of their products, production volume and price-quality ratio, win a market competition involving the best. Serbian Government continues to pander export to foreign markets and encourage domestic companies to compete and win, because it is obvious that we have required and recognized quality. In the upcoming months I expect other local suppliers to involve in the General Electric’s procurement system” – said Ana Brnabić, Minister of State Administration and Local Self-Government.

General Electric Sourcing Day was launched in 2015 in order to include Serbian companies, strengthen the production capacities and encourage exports of selected local companies in the process of GE global procurement.