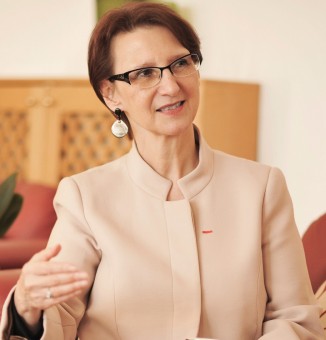 By entering the industrial era, mankind entered the era of climate change on the planet. People’s activity is directly affected by the increase in emissions of greenhouse gases, in addition there was a threat that will die 20 to 30 % of animal and plant species, the level of seas and oceans is increasing, and all this affects the new migration and far-reaching social and economic changes. Global warming is causing severe meteorological changes such as floods, drought, natural disasters, storms … All of this will be discussed at the COP21 conference about which we talk with the Ambassador of France in Serbia, Mrs Christen Moro who on behalf of the host country speaks for our special edition about organization of the conference in Paris, the significance of this event, the activities of Serbia when this topic comes and more…

EP: The Conference COP21 is the biggest diplomatic event ever, that will take place in France, and 195 countries and EU delegation are expected delegations. Do you expect that the effects of this event are grandiose like the event itself?

CHRISTEN MORO: Grandiose is not the appropriate word, we do not seek a “show off” effect but a breakthrough in negotiations which have already lasted for too long without decisive result, while the evolution of climate is rapidly deteriorating.

The negotiations in Paris have been prepared well in advance, with a close cooperation between the current presidency of the COP (Peru who presided over COP 20) and the incoming presidency, France, responsible for COP21. We have used all methodological means to make the positions converge towards our target: a universal, though differentiated, agreement, a binding agreement, a regular monitoring and upward revising mechanism.

On the way to COP21, the preparations have already produced very good and encouraging results: to date, 167 countries have submitted national commitments (“INDCs”), covering 91% of global greenhouse gas emissions by 2011. This high number is in a way a plebiscite showing that the purpose of this negotiations is understood and shared worldwide. Serbia has contributed to this successful preparation: it was among the first countries to deliver, last June, its national commitments to UNFCCC.

With the collected commitments, we are on the right track: the INDCs are already making a significant shift in trajectory even though they are not sufficient to limit the rise in average temperature below 1.5 to 2 degrees Celsius – which is the target.

A good progress has been made in recent weeks, just ahead of the Conference, to find convergence in the remaining causes of dissent. The most important is that the political leaders are aware that decisions must be taken NOW, and we count on them to give the necessary impulse. The declaration of the G20 meeting in Antalya is contributing to this political impulse.

The involvement of civil society ahead of and during the Conference is also very important. In spite of the recent dramatic events in Paris we have decided to maintain the Conference itself – which will be a moment of hope and confidence in the future – including the events with civil society – as long as they take place in spaces where security can be guaranteed.

EP: France wants to play an exemplary role in this process. EU member states have committed to reduce emissions of greenhouse gases by 40% by 2030, and France takes a step further by trying to reduce the greenhouse gas emissions by 60% until 2040. What type of resources and potentials does France need in order to implement this plan?

CHRISTEN MORO: Climate change is a priority of French government since the early 1990s. By representing only 1.2% of global emissions, while it accounts for 4.2% of global GDP (gross domestic product), France is among industrialized countries that emit less greenhouse gases. Between 2008 -2012, France has reduced by more than 10% its emissions of greenhouse gases thanks to “low carbon” technologies in the areas of transport, land use and agriculture.

Recently we have adopted the law on the energy transition, which paves the way to a more sober economy in energy consumption, while renewable energy is increasing its share in energy production. We are convinced that it is possible to develop a green economy without sacrificing growth, and avoiding huge expenses for damage caused by global warming. We plan that the energy transition will create around 100,000 new jobs in various fields including renovation of buildings, renewable energy, recycling economy, etc.

Industries and companies used to wait for incentives or coercive policies to act. Today, they show their voluntarism: they have become aware that their own economic interest is to commit themselves to low-carbon practices. And they have understood that the fight against climate change is a source innovation and competitiveness. More than 1500 French companies already published their quantified commitments to climate change.

EP: The French Embassy in Serbia is active, and has launched a series of exhibitions, debates, seminars that included the local community on the topic COP21. What are the results of these activities?

CHRISTEN MORO: Serbia has understood where its interests lie, and is aware of the constraints and damages caused by the effects of climate change: natural catastrophes such as droughts and floods, consequences of global warming on agriculture, public health … For several years France has had a good cooperation with Serbia in those fields and we understand each other. We have found in that preparation of COP21 common grounds for joint actions with the government, local authorities, schools and universities… We have also worked together with researchers and innovation stakeholders, NGOs and citizens. A broad involvement is essential, not only having COP21 in view, but more broadly having in view the period after COP21: the success of the commitments taken will not be possible without participation and support from all levels and fields within the country. The actions taken have raised the awareness of the public, who understands better what is at stake, what is the cost of inaction, what are the benefits of action and what can be done at individual and collective level.