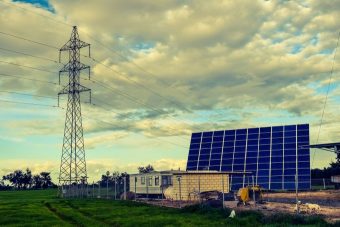 Residents of the Isle of Canna off the west coast of Scotland have secured £1.3m to largely ditch their diesel power generators in favour of a new community-owned renewable electricity system based on solar PV, wind, and battery storage technologies in a bid to cut fuel usage and costs.

Construction of the off-grid renewable energy system is due to start next month and is expected to take around seven months to complete, after which profits from the power generated will be used to cover operation and maintenance costs, and reduce bills for local homes and businesses.

The existing diesel generators will continue to be leased to islanders, but it is hoped that upwards of 90 per cent of their electricity needs will be met by the PV panels and six small onshore wind turbines being built on the island.

The community has established its own enterprise – Canna Renewable Energy and Electrification Ltd (CREEL) – to own and operate the new equipment.

There are only around 15 residents living on Canna. Since 2000 Canna has been powered solely by three diesel generators and has had no connection to the National Grid. The news comes after the National Trust for Scotland handed over control of the Hebridean island’s regeneration to a development trust run by its residents late last year.

“The island is exposed to the full force of Atlantic gales and we can finally start to put that to good use,” she said. “As well as reducing the noise and pollution from the generators the new scheme will give us the capacity to build additional houses here, so that we can increase the number of people who can make their home on this beautiful island. We’re very grateful to all of our funders for their support in this vital project.”

The venture has secured over £983,000 from the Big Lottery Fund and £150,000 from the Scottish Government, on top of an additional £100,000 from the SSE Highland Sustainable Development Fund. £50,000 each was also provided by Highlands and Islands Enterprise and the National Trust for Scotland.

Philip McCaherty, development manager at Highlands and Islands Enterprise said the innovative project would help to strengthen the local community as well as boosting skills and volunteering opportunities. “Having electricity 24 hours a day will transform the community and attract more residents and visitors to the island and we are delighted to be supporting it,” he said.