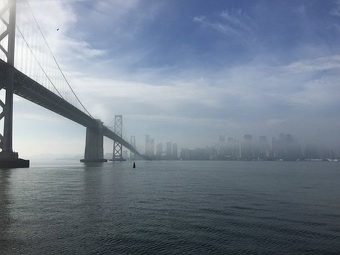 Those living in the US who want to know how bad it can get as far as air pollution goes, or for that matter what it’s like to live in the cities of Northern China, may want to pay attention to what’s happening in the San Francisco Bay Area.

“Thanks” to the ongoing wildfires in the area, the region’s air quality was roughly as bad as Beijing’s on Thursday morning. Though, it’s noteworthy here of course that the causes of pollution, and the exact dangers, are quite different in the two regions.

Accompanying the high levels of air pollution were reports in local media of pedestrians and bicyclists wearing masks in public — a relatively uncommon sight in the US.

“These fires are bringing Beijing to the Bay Area and are allowing us to see what they experience around the clock,” commented Richard Muller, a UC Berkeley professor of physics, and a co-founder of the site air quality tracking site Berkeley Earth.

Here’s more (via SF Gate): “On the morning of Oct. 12, the amount of particulate matter in the area in some parts of San Francisco were in the 151-200 range on the air quality index, matching that in Beijing. The Bay Area has been choking on wood smoke since Sunday night after wind-stoked fires broke in Napa and Sonoma counties.

“On Thursday morning, most of the Bay Area reached an ‘unhealthy level,’ prompting schools to keep students inside at recess and forcing some to close entirely. ‘We’re seeing the worst air quality ever recorded in many parts of the Bay Area,’ Flannigan told SFGATE earlier this week. ‘The entire Bay Area population is likely being affected by the smoke’.”

While this round of extreme air pollution in the Bay Area won’t last, it’s worth realizing that if current trends were to continue, such events would/will become much more common. At any rate, it’s pretty much baked in at this point that wildfires will become increasingly common in the region over the coming years.