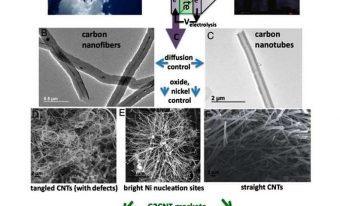 Last year, researchers at George Washington University proposed a method for transforming CO2 emissions into carbon nanotubes (CNTs). When applied to power plants, the technology could completely eliminate the power plants’ CO2 emissions while simultaneously producing a valuable product that is used for a variety of applications, including batteries, consumer electronics, airplanes, and athletic equipment. The technology can work with almost any kind of power plant, but the researchers specifically investigated its application for combined cycle (CC) natural gas power plants, which are the most efficient kind of electrical power plant yet still emit massive amounts of CO2.

The idea is to add a molten lithium carbonate electrolyzer to a conventional CC plant, creating a CC carbon nanofiber (CC CNF) plant. Using electrolysis—the same technology that splits water to produce hydrogen—the system applies a voltage to split CO2 into oxygen gas and solid carbon nano fibers. Adding in small quantities of nickel causes the carbon nano fibers to be hollow, forming CNTs. To make sure that the idea isn’t too good to be true, in a new study the same researchers have performed a thermodynamic assessment of the proposed CC CNF plant. They found that the concept is economically feasible and even improves the power plants’ energy efficiency.

“The technology incentivizes carbon dioxide removal by transforming this greenhouse gas into a valuable product to ameliorate the impact of climate change,” Stuart Licht, a chemistry professor at George Washington University and leader of the study, told Phys.org. “The production of CNTs will actually be more profitable for fossils fuel power plants than making power, and this should incentivize the transition to a renewable, sustainable society. CNTs have over twenty times the strength of steel or aluminum and are lower weight, and we hope that the CNTs will provide a complete replacement for the trillion-dollar steel and aluminum market. CNTs are also useful in nanoelectronics and new medicine delivery systems, and are already being used in textiles [such as bullet-proof clothing].”

The researchers’ assessment shows that, for every metric ton of methane fuel consumed, a conventional CC power plant produces $909 of electricity and emits 2.74 tons of CO2. In contrast, the proposed CC CNF plant would produce about $835 of electricity, which is about 8% less than the CC plant. But the CC CNF plant would also produce about 0.75 tons of CNTs, which is worth an estimated $225,000, and emits no CO2. 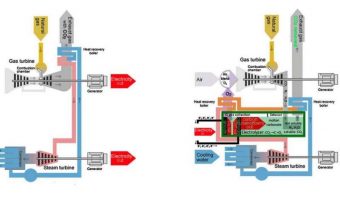 In other words, the small decrease in power output is more than compensated for by the highly valuable carbon nano fibers and nano tubes that could be produced. This is mainly because industrial-grade carbon nano tubes are such an expensive commodity, which currently cost about $300,000/ton ($130/pound) to produce using methods available today. Using the new method, the researchers estimate that it would cost just $2,000/ton to produce CNTs—less than 1% of current production costs. The researchers hope that this large profit potential will make the technology seem like an obvious choice. Since CNTs are about 10,000 times more valuable than carbon tax credits (which are roughly $30/ton), the researchers predict that CNT production will offer a greater incentive for the energy industry to reduce carbon emissions than carbon tax credits offer.

Even though the value of CNTs would likely decrease in the future since they can be produced much more easily and cheaply using this new method, that would simply spread part of the economic benefit to other industries. Lower CNT prices would spur CNT market growth and positively impact the many industries that use them, including the automobile, airline, and wind turbine industries.

The researchers’ assessment also shows that the CC CNF plants make sense from a thermodynamic perspective when compared to conventional CC plants with and without carbon sequestration, as well as conventional coal plants.

Even though the CC CNF plants would produce somewhat less electricity than the other types of plants, they would do so at a higher efficiency. The improved efficiency is due to heat energy gained in several areas that could be recycled back into the steam turbines. The heat energy comes, for instance, from the energy produced from chemical reactions with lithium oxide; the energy gained from cooling the carbon and oxygen products; the energy gained from burning the natural gas with a mix of pure oxygen and air (splitting the CO2 releases pure oxygen as well CNTs); the energy saved from preventing CO2 emissions; and the energy gained by capturing CO2 at a much higher temperature than the temperatures at which CC plants with carbon sequestration operate. And unlike carbon capture technologies, energy is not need to store the CO2 as a waste material, since instead it is converted to a valuable product.Currently, the researchers are working to build and implement the technology as quickly as possible.”We are quickly scaling up the process, which is the challenge to rapid deployment and substantial CO2 reduction,” Licht said. 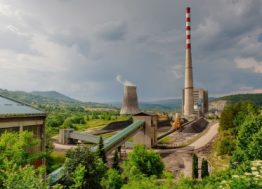