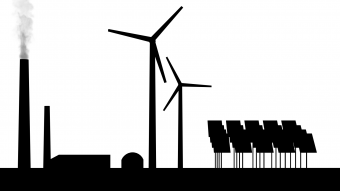 Solar PV increased its share by an impressive 30%, growing to 3.5 TWh up from 2.7 TWh due to increased capacity. Unfortunately, keeping renewable energy’s contribution from soaring even higher, bioenergy fell by 14.5% due to outages at the Drax power station.

All told, with renewables accounting for 25%, the remainder was made up with 25% from nuclear energy (which you can fight over whether it’s a good or a bad thing), and gas with 43.6%. Coal only accounted for 3.6%, down from 16.7% a year earlier.

“The Government took the right decision when it announced the phasing out of coal, and its confidence in low carbon generation has been repaid by growth in the sector,” said Maf Smith, RenewableUK’s Deputy Chief Executive.

“Renewables are now part of our energy mainstream, helping us modernise the way we keep the lights on by building new infrastructure for the generations to come. Wind is playing a central role as a reliable part of our new modern energy system, delivering reliable low carbon power at low cost.”

The Energy Trends report also highlighted the impressive role renewable electricity generation is playing in Scotland. According to the report, renewable energy produced enough power to meet 59.4% of Scotland’s electricity needs throughout 2015 — up from 49.7% in 2014.

“These figures are great news for Scotland,” said Jenny Hogan, Director of Policy at industry body Scottish Renewables. “They underline the disproportionate contribution that Scotland is making to the UK’s efforts to clean up our energy system.

“We know that to fight climate change we must reduce the amount of carbon emitted by our energy sector, and renewables are doing just that.”