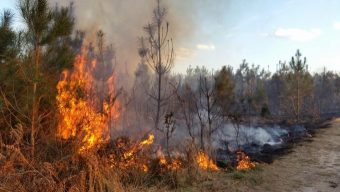 The record loss of global tree cover in 2016 — totaling around 297,000 square kilometers (114,672 square miles) and representing a rise of 51% on 2015 — was driven partly by increasingly common wildfires driven by rising temperatures and drought, according to the Global Forest Watch (GFW) which utilized data provided by the University of Maryland.

“We saw quite a dramatic spike in 2016,” stated Mikaela Weisse, a research analyst at the US think-tank World Resources Institute, which oversees GFW. “That seems to be related to forest fires in countries including Brazil, Indonesia and Portugal.”

Altogether, tree cover equivalent to the full size of New Zealand was lost in 2016. (It should be noted here that GFW measures the actual loss of global tree cover, and doesn’t attempt to estimate net changes in forests to account for possible re-growth and tree planting.)

“By contrast, the UN’s Food and Agriculture Organization, using different methods, says the net global rate of deforestation has slowed by more than 50% in the last 25 years,” Reuters reports.

“GFW said Brazil’s Amazon region lost 37,000 square kilometers of tree cover in calendar 2016, almost three times more than in 2015. That contrasts with official Brazilian data showing that deforestation in the Amazon fell 16% in August 2016 to July 2017 compared with the same period a year earlier. Brazil said it was the first decline in three years. Brazil’s environmental agency Ibama said 2016 was the ninth-worst year for forest fires since monitoring began in 1998.”

So, what do you know, based on GFW figures, it appears that official deforestation data from the Brazil and the UN (amongst many others) underestimate the problem — what a surprise.

Reuters continues: “Weisse said GFW data often detected smaller-scale losses in tree cover, including in layers beneath the forest canopy, while the Brazilian data was better at recording clearances of large blocks of forest. GFW said Indonesia lost almost 1 million hectares of tree cover in 2016, probably the delayed result of a severe fire season in 2015.”

Recall this year’s forest fires on the West Coast of North America and in the Mediterranean if you want to understand where things are headed — it’s only going to get worse from here on out.