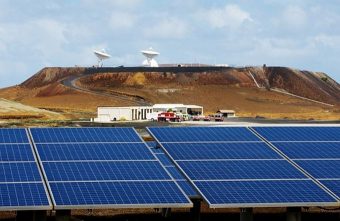 Puerto Rico Governor Ricardo Rossello sent out a tweet boasting about the island finally reaching a 50 percent power threshold after Hurricane Maria wiped out the electric grid 56 days ago.

“Then ‘boom’ (a witness reported) the lights went out,” tweeted CBS News reporter David Begnaud, who has been extensively reporting on the U.S. territory’s recovery efforts. “Timing could not be worse.”

The outage was due to a failure of the Cambalache Manatee 230KV line, according to Puerto Rico’s electric power authority (PREPA), the same major transmission line that failed last week and left the grid working at only 18 percent.

Puerto Rico’s power generation has dipped back to 48 percent and is another reminder of the island’s painstaking efforts to rebuild after the Category 4 hurricane struck on Sept. 20.

The governor told a Senate panel on Tuesday that the territory should boost its use of wind and solar electricity to provide for as much as 25 percent of the island’s electricity, Bloomberg reported.

“We certainly see a collaboration with the private sector,” Rossello said.

Business leaders and clean energy advocates such as Virgin Group CEO Richard Branson have said that renewables could be a solution to regions wrecked by damaging hurricanes. Branson, who rode out Hurricane Irma on his private island in the Caribbean, is working with global leaders including the International Monetary Fund to help rebuild the Caribbean islands, according to the report.

Last month, Tesla was praised for quietly sending hundreds of its solar-paired battery packs to help Puerto Rico deal with widespread power loss. The company is working on “many solar + storage” projects on the island.

As EcoWatch reported, one of Tesla’s projects was restoring electricity to a children’s hospital with its solar panels and Powerpack commercial energy storage batteries. The beauty of such a set-up is that the hospital can generate power when the sun is shining and reserve it for later use when the sun is not out or, say, to help recover from a destructive natural disaster like a hurricane. It was because of solar power that a 40-acre plant farm in Barranquitas in central Puerto Rico was able to slowly rebuild in Maria’s wake.

Rebuilding the island will not be cheap. Case in point: Rossello has asked Congress for a whopping $94.4 billion to help Puerto Rico “build back better” after Maria.

Puerto Rico, which has suffered from the largest and longest blackout in American history, has long grappled with electricity problems.

As Peter Fox-Penne wrote for the Conversation, “Almost half its generation was from old, very expensive oil-fired plants, resulting in prices about 22 cents per kilowatt hour, among the highest in the U.S. The island has several solar photovoltaic farms but gets about 46 percent of its power from oil and only about 3 percent from solar.”

In recent weeks, PREPA has been mired in controversy over its highly criticized $300 million no-bid contract with Whitefish Energy, a tiny Montana energy firm tasked to restore the island’s power. That contract has since been canceled and is under FBI investigation.