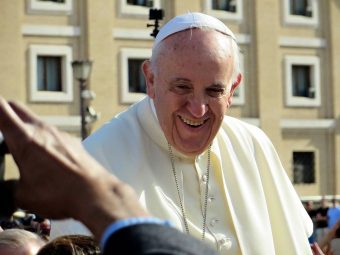 Indifference to the effects of anthropogenic climate change, and also the outright denial of growing climate warming and instability, are “perverse attitudes,” Pope Francis stated in a message to some of the ministers meeting at the ongoing climate talks in Bonn.

Such attitudes block research and dialogue that would otherwise be aid in the effort to limit the extent of anthropogenic climate change, and thus to protect the future of life on the planet.

“We have to avoid falling into these four perverse attitudes, which certainly do not help honest research and sincere and productive dialogue on building the future of our planet: negation, indifference, resignation, and trust in inadequate solutions,” he stated.

The reference to “trust in inadequate solutions” is perhaps the most interesting, as the reality is that if anthropogenic climate change is to be limited to any serious degree, then effectively all of the world’s agricultural, industrial, and transportation/shipping systems will need to be completely transformed.

It’s not anywhere near enough to to simply slowly transition to renewable energy and electric cars … despite what many people seem to think, or want to think.

Pope Francis went on to refer to climate change as “one of the worst phenomena that our humanity is witnessing.”

Reuters provides more: “He praised the Paris accord, which US President Donald Trump said the United States planned to leave, for indicating what he called a ‘clear path of transition towards a model of economic development with little or no carbon consumption’.”

“The United States is the only country out of 195 signatories to have announced its intention to withdraw from the accord, which aims to cut emissions blamed for the rise in temperatures. Trump announced the decision in June shortly after visiting the pope. At the time, a Vatican official said the move was a ‘slap in the face’ for the pope and the Vatican.”

Syria recently became the last country to sign onto the COP21 Paris climate agreement. The United States is the only country that says it will leave the agreement.

As those reading this may recall, Pope Francis was quoted just a few months ago as saying that the surge of hurricanes that hit North America and the Caribbean this year is a sign of things to come, and that humanity “will go down” if adequate actions aren’t taken to limit climate warming and instability.

Related, from the Global Catholic Climate Movement: In tackling climate change, Pope Francis asks us to leave behind denial, indifference, resignation and trust in inadequate solutions.