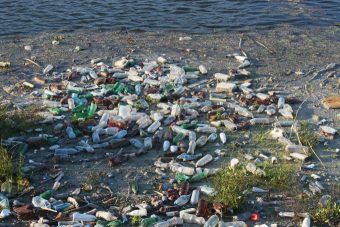 The coastline of Kenya has been a hotspot for tourism and fishing activities for a quite a while now — with the region also being home to fair numbers of sea turtles. Recent years, though, have made the region home to significant quantities of plastic trash and debris — much of which eventually washes into the sea.

With that reality in mind — and also the effect that such pollution has on wildlife and tourism — a man by the name of Sam Ngumba Ngaruiya has in recent times been working with locals in and around the town of Malindi to gather up and recycle the ubiquitous plastic pollution into construction materials.

The idea is simple: pay locals to gather up plastic debris and pollution, and then repurpose it into useful construction materials (fence poles, roof tiles, road signs, flooring, containers, etc.).

Ngaruiya’s firm, Regeneration Environmental Services Ltd, pays locals 10 shillings for 1 kilogram of plastic (~2 two-liter water bottles). Effectively, according to Ngaruiya, this means that in 4 or so hours, around 50 kilograms of plastic can be collected by those working on this — resulting in earnings of around 500 shillings ($4.86).

That’s roughly “enough to eat and feed their family for a day,” according to Ngaruiya. So, not a bad deal all things considered for those looking to make a living and also help clean up the local living environment.

The gathered plastics are then separated into 8 different types, which are then machine-chopped into flakes around 1-cm in size. These plastic flakes are then rinsed and dried — following which, they are then combined with hardeners and sun-blockers, then heated to around the melting point (avoiding going much higher limits toxic fume creation). Into this heated mass, locally acquired gravel, sand, coconut fibers, sawdust, etc., is added — with the mixture then being poured into already created moulds of the products in question.

“Basically we are substituting plastic for cement,” explained Ngaruiya in an interview with Reuters. The US-trained engineer went on to explain that when the melted plastic cools, it absorbs and “squeezes” the sand, creating a compact and rather strong building material.

“These recycled plastic products can last 200 years,” he continued. So, in other words, arguably the greatest “negative” of plastics — their resistance to degradation and decay — becomes a positive owing to a change of context (construction materials), according to Ngaruiya.

The coverage from Reuters continues: “Kai, a 3-year-old green sea turtle, was released back into the turquoise waters of the Indian Ocean off Kenya’s coast this month. She had been hospitalized after her guts were blocked with white plastic bags she swallowed, mistaking them for jellyfish, and tiny plastic pieces entangled in the sea grass she eats.

“In a bid to clean up Kai’s environment, the villagers of Watamu, who depend on fishing and tourism, joined hands in 2016 with an entrepreneur and a local ocean conservation charity to recycle plastic waste from two marine national parks in eastern Kenya … Villagers in Watamu, including school children, gather plastic waste from the sea, beaches and households every Friday, a holy day for the Muslim-majority community here.”

To date (since work began in 2016), Ngaruiya’s company has recycled around 40–50 tonnes of plastic pollution gathered from nearby areas. With the firm’s recycling plant possessing a daily capacity of around 2 tonnes, there’s certainly still room for growth, but orders for the recycled materials being produced there have remained sparse — despite being “competitively priced,” according to Ngaruiya.

Something very interesting here is that there is no government support backing the work — or support from various agencies, banks, etc. Ngaruiya has put around $500,000 of his own money into the project.

Kenya, as you may remember, actually went ahead and banned single-use plastic bags earlier this year because of the environmental problems associated with them, so the recognition that plastic pollution is a problem is there, but direct support for Ngaruiya’s project is nonexistent.

Ngaruiya noted that there likely needed to be a change at the consumer level for real change to come about: “It’s time to take personal responsibility with one’s own waste, to separate the organics from the plastics, and ensure they reach the recycling centers.”

He added that there needed to be many more facilities like his along the coast of Kenya to better deal with the problem.

To provide more context here, tourism in Kenya has fallen considerably in recent years, particularly with regard to coastal regions. The official line on the matter is that Islamist groups have created a security issue in the region. Other opinions exist, though, with a notable one being that the growing pollution problems scare tourists away.

A currency exchanger in Watamu by the name of Ben Kithiy was quoted as saying: “Floating plastic pieces sticking to the body when you are swimming in these waters makes for a very unpleasant experience.”

He added that even local children didn’t like swimming at the beaches much anymore as a result.

Kithiy also explained that over the last year he has found 5 rotten dead turtles on just his local beach in Blue Lagoon Bay; with many others also seen floating lethargically in shallow waters after consuming plastic debris (most of which likely starved). Obviously, such sights aren’t likely to draw in tourists looking for a vision of “unspoiled paradise.” (The fact that tourism, and international wealth pumps in general, are directly associated with such pollution is seemingly lost on many people.)

The head of the local Watamu Turtle Watch conservation program, Casper Van De Geer, explained to Reuters that around 15% of the turtles brought in for rehabilitation every year were directly harmed by the ingestion of plastic.

He stated: “Close to half of them die of infection as pieces of hard plastic lodge into nooks and crannies inside the intestine, lacerating it and causing infection.”

Hopefully, attitudes and initiatives similar to Ngaruiya’s become more common over the coming years. If ecological collapse is to be avoided, then such a shift will be a necessity.