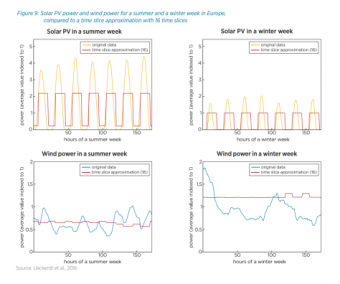 Spurred by ambitious national commitments, international agreements and rapid technological progress, governments are increasingly choosing renewable energy to expand their countries’ power infrastructures. In 2014, renewables provided 23% of power generation worldwide, and with the adoption of more ambitious plans and policies, this could reach 45% by 2030.

Amid this accelerating transition, the variability of solar and wind energy — two key sources for renewable power generation — presents new challenges. It also raises questions, like ‘How do you power a country when the wind isn’t blowing or the sun isn’t shining?’ and ‘How does variable power fit with the delivery of reliable electricity?’

“Various modelling tools are available to support long-term scenarios, defined as periods covering 20 to 40 years into the future, and we discuss these tools in depth in the report,” says Asami Miketa, a programme officer for Energy Planning at IRENA’s Innovation and Technology Centre. “Energy policy-making has always benefited from quantitative scenarios created with modelling tools, as they help define long-term policy goals and determine optimal economic investment pathways.”

The report’s first half, which is devoted to guiding decision makers in the transition to VRE, underlines the need for an internally consistent approach — with clear parameters and policy goals that are aligned across planning priorities over different time horizons. “Feedback among planning processes as well as different stakeholders must be taken into account when assessing high shares of VRE in a power system,” says Miketa. “This is to accommodate for spatial and operational issues that could change the cost-effectiveness of long-term planning scenarios, like the need for greater flexibility in a system or even additional transmission capacity.”

Long-term models used for planning VRE are covered in the report’s second half. Models need to account for a wide range of long-term investment implications of VRE deployment. Practical approaches, tools and data have already been developed in some markets to address issues like generation adequacy, flexibility, location siting, and the stability of a power system. The report advises countries to start simple with VRE planning and to take a strategic approach to advance the scope and quality of their models.

“Though solar and wind power have now become cheap, taking advantage of these technologies requires careful planning and modelling,” says Miketa. “This report, and IRENA’s guidance, should help emerging economies to set themselves on a path towards sustainable development with renewables.”

To learn more about variable renewable energy planning and modelling, read the report on IRENA’s website.