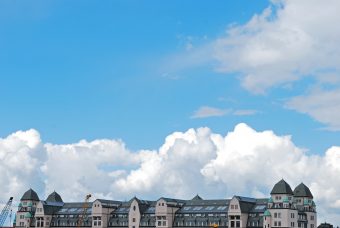 Oslo’s leftist city government issued its first “climate budget” on Wednesday aiming to halve greenhouse gas emission within four years in one of the world’s most radical experiments to slow global warming.

The budget, setting out annual goals to choke off emissions from cars, homes and businesses in the Norwegian capital, adds to a scheme announced last year to ban private cars from the city center.

Left-wing parties, led by Steen’s Labour Party, won a majority in the city council in 2015 for a four-year term and have set about using wide powers to re-design the capital of a nation run by a right-wing government.

Under Wednesday’s plan, Oslo will raise tolls for cars to enter the city, cut parking spaces, phase out fossil-fuel heating in homes and offices by 2020, shift the bus fleet to renewable energy and build ever more bicycle lanes.

Seth Schultz, of the C40 Cities organization in New York which groups 86 cities working to address climate change, said he did not know of such a radical plan by any other major city.

“Integrating carbon into the financial budget is new,” he said. More and more cities, from Buenos Aires to Beijing, are laying out plans to curb emissions of greenhouse gases.

The Oslo council agreed earlier this year to halve emissions from Oslo to 600,000 tonnes of carbon dioxide in 2020 from 1.2 million in 1990, and even more steeply from current levels around 1.4 million. It also aims for net zero emissions by 2030.

Wednesday’s climate budget outlines how. Even if the plan falls short, Steen said it will be worth the effort to highlight the risks of climate change such as heatwaves and rising seas.

Glen Peters, of the Center for International Climate and Environmental Research in Oslo, said the projected cuts would be unprecedented. “It will be a stretch,” he said.

No country had cut emissions by more than about five percent a year, a rate achieved by France when it shifted to nuclear power from fossil fuels in the 1970s, he said.

Governments in rich countries project it will take decades to halve national emissions, which are a larger task that a city faces.

Parts of Oslo’s plan also depend on funds from the national government. Oslo has been experimenting with capturing carbon from an incinerator burning municipal waste, but a full-scale project might cost 2 billion Norwegian crowns ($246 million).

“When we can finds solutions in Oslo maybe we can help other cities,” Vice Mayor Lan Marie Nguyen Berg, of the Green Party, told Reuters.