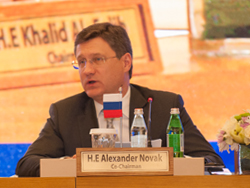 Following the ‘Vienna Agreement’ decided upon at the 171st Meeting of the Conference of the Organization of the Petroleum Exporting Countries (OPEC) on 30th November, 2016, Ministers from OPEC met with a number of Ministers from non-OPEC oil producing countries on Saturday, 10th December, at the OPEC Secretariat in Vienna.

The Meeting noted that OPEC Member Countries met on 30th November 2016 and decided to implement a production adjustment of 1.2 million barrels a day (mb/d), effective from 1st January 2017.  The Meeting recorded that OPEC Member Countries, in agreeing to this decision, confirmed their commitment to a stable and balanced oil market and underscored the importance of other oil producing countries joining their efforts.

The Meeting recognized the desire of Azerbaijan, Kingdom of Bahrain, Brunei Darussalam, Equatorial Guinea, Kazakhstan, Malaysia, Mexico, Sultanate of Oman, the Russian Federation, Republic of Sudan, and Republic of South Sudan, as well as other non-OPEC producers, to achieve oil market stability in the interest of all oil producers and consumers.  In this regard, the aforementioned countries proposed to adjust their oil production, voluntarily or through managed decline, starting from 1st January 2017 for six (6) months, extendable for another six (6) months, to take into account prevailing market conditions and prospects.

The aforementioned countries and OPEC, convinced of the necessity to jointly cooperate to help stabilize the oil market, reached the following:

-OPEC maintains its decision made on 30th November 2016, whereby arrangements were recorded following the extensive understanding of OPEC’s adjustment;

-Azerbaijan, Kingdom of Bahrain, Brunei Darussalam, Equatorial Guinea, Kazakhstan, Malaysia, Mexico, Sultanate of Oman, the Russian Federation, Republic of Sudan, and Republic of South Sudan commit to reduce their respective oil production, voluntarily or through managed decline, in accordance with an accelerated schedule.  The combined reduction target was agreed at 558,000 barrels a day for the aforementioned producers;

-That two participating non-OPEC countries shall join the OPEC Ministerial Monitoring Committee, consisting of oil ministers, chaired by Kuwait with the Russian Federation as alternate chair and assisted by the OPEC Secretariat;

-To strengthen their cooperation, including through joint analyses and outlooks, with a view to ensuring a sustainable oil market, for the benefit of producers and consumers; and

-To regularly review at the technical and ministerial levels the status of their cooperation.

-Finally, the Meeting expressed its gratitude to the Government and to the people of the Republic of Austria, as well as the authorities of the City of Vienna for their warm hospitality and excellent arrangements made for the Meeting.