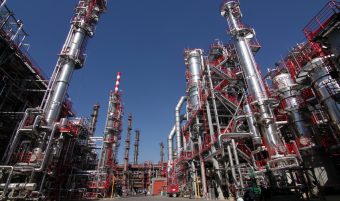 NIS successfully completed investment works at the Pančevo Oil Refinery within the framework of further modernisation of refinery processing at NIS. In this manner, the company improved energy efficiency, and ensured a higher output of quality petroleum products and a more reliable operation of its facilities.

The works are valued at approximately seven million Euros in total. They involved over 2,000 employees of NIS’ Refining and Oilfield Services, and domestic and foreign contractors, who put in more than 500 thousand man hours and complied with the highest occupational safety standards applied at NIS. All the activities in the course of additional modernisation of the refinery were in conformity with regulations of the Republic of Serbia and the highest ecological standards. In addition, the highest standards in occupational health and safety were met during the performance of works.

Nearly all process units were subject to the investment works – primary refinery units, atmospheric and vacuum distillation, Mild Hydrocracking and Distillate Hydrotreating Unit (MHC/DHT) and Hydrogen Unit. Further, the largest refinery unit for producing petrol components and gases, as well as the secondary refinery units were subject to maintenance works. Following a successful four-year operation, this was an opportunity for the first capital maintenance of the modern MHC/DHT complex along with catalyst replacement, which paved the way for an additional increase in the output of the highest-quality Euro 5 diesel. The major investment project also encompassed modernisation and improvement in the reliability of power supply, and the Platforming Unit, where a state-of-the-art heat exchanger was installed, which will have a significant effect on improving energy efficiency at the refinery.

It is by the project of additional modernisation of the refinery that NIS is planning to make a saving of several million Euros per year, mainly owing to energy efficiency improvement. During the works, all types of petroleum products were regularly supplied to the market, as sufficient stocks had been made by increasing output in the period prior to the works.

“By additionally modernising the Pančevo Oil Refinery, NIS is strengthening the competitiveness of its processing facilities and, despite the long-running crisis in oil industry, it continues to implement key development projects, including a further development of crude oil processing facilities. We take pride in the fact that this makes it possible for the refinery in Pančevo to stay among the most modern ones in this part of Europe, not only in terms of the quality of the products it provides to the market, but also in terms of strict compliance with ecological standards in the process of oil refining,” stated Vladimir Gagić, Director of Refining at NIS j.s.c.