Solar panels are sprouting on farmland like mushrooms after the rain, but there’s no such thing as a free lunch. If too many solar panels replace too much cropland, there goes the food supply. However, farmers are beginning to learn how to do their farming within solar arrays, and in a new green twofer, solar arrays could actually help push the regenerative agriculture movement into the mainstream. 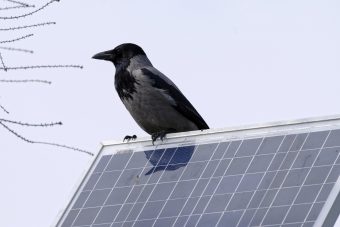 The first twist in the field of solar + farming was a relatively simple one. Raise the solar panels just a few extra feet off the ground, and you can graze sheep and other animals on the same land. You can also use the land for pollinator habitat. Et voilà, there you have something new called agrivoltaics.

Of course, raised solar panels can involve some extra cost, but that could be counterbalanced by an increase in efficiency. Researchers are beginning to amass evidence that allowing plants to flourish under a raised solar array can improve solar cell efficiency by creating a cooling microclimate.

As for growing human-edible crops, that’s a tougher row to hoe. For starters, the solar panel racks would limit the width and height of motorized farm equipment. That’s not necessarily a deal breaker, but then another challenge is to identify crops that can grow efficiently in the shade.

Either way, the solar + farming movement has already caught the attention of the US Energy Department’s National Renewable Energy Laboratory, which is looking for ways to protect farmland against overpopulation by utility-scale solar arrays. The agency’s Office of Renewable Energy and Energy Efficiency has also published a handy “Farmer’s Guide to Going Solar.”

All of this is good stuff, but it gets even better. A new solar project soon to start construction on a farm in Grafton, Massachusetts is aiming to do double duty as a holistic preservation tool that helps improve soil and enhance nutrition for grazing animals.

The ultimate goal is to create a more sustainable farm economy and cultivate the next generation of farmers. That’s an especially important consideration in Massachusetts, where farmers need to stay in the business of farming in order to maintain good standing with the state’s SMART solar incentive program for farmers.

The Boston-based developer BlueWave Solar is spearheading the project, and Clean Technica recently spoke with the company’s head of sustainability, Drew Pierson, for some additional details.

“BlueWaveBW has been around for just under 10 years as community solar developer, and we’ve always had an ethos of doing right by people and planet and furthering environmental conservation,” Pierson explained.

The company was an early agrivoltaic adopter and has been working closely with the University of Massachusetts, which administers the SMART program among other solar initiatives. The collaboration with BlueWave includes a shade modeling tool for solar arrays to help with agricultural land use planning.

The Grafton solar project includes 12 acres set aside for grazing, and two acres for raising vegetables, such as strawberries, leafy greens and pumpkins.

For both arrays, Pierson explained, the solar panels will be raised about 10 feet off the ground, and every third panel will be removed in order to let more sunlight in.

Taking advantage of yet another twist in the farm + solar saga, the solar panels will be bifacial, meaning their back side can convert solar energy reflected from the ground. Researchers are already exploring ways to enhance this “ground albedo” effect with different types of ground coverings, including vegetation. That could lead to additional enhancements in solar cell efficiency on farmland.

If all goes according to plan, the regenerative agriculture part of the project will really kick in when monitoring equipment is installed.

“This might be the basis for putting carbon back in the soil,” Pierson said. “We can measure how the land responds to this kind of management technique, including the infiltration of stormwater, the density of grass, and the beneficial microclimate of the solar panels.”

The human factor also comes into play. The new solar development includes a manger who will facilitate communication between the farmer, the SMART incentive program, and the various stakeholders in the solar project. Part of the aim is to help smooth compliance issues for the farmer, but that’s just for starters.

The manager will also help support the farmer with agricultural planning and resources. In addition to keeping individual farms in business, the overall aim of the manager-assisted program is to create new opportunities for starting new farming operations and reviving dormant ones.

The Grafton farm, for example, was worked by the same family for decades until the financials stopped working. With a new solar array in hand, the land will go back into production for the first time in about 20 years.

Try that with your coal mine!