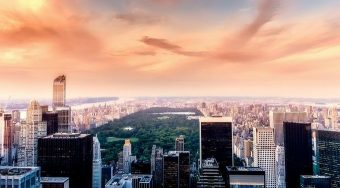 Central Park in New York City is the most visited outdoor space in the United States. 40 million people a year flock to Central Park to partake of its charms. First established in 1857, it was designed by famed landscape architects Frederick Law Olmstead and Calvert Vaux in 1858. By the start of the 20th century, the park had begun to decline. That’s when Robert Moses, who never met a mile of asphalt he didn’t like, stepped in to bring Central Park back to its original glory. He also took that opportunity to add several roadways within the park. Those roads soon became popular avenues for Manhattanites to drive crosstown.

Central Park MapLast week, Mayor Bill de Blasio announced that all private vehicles will be banned from using the roadways in Central Park as of June 27. “Our parks are for people, not cars,” de Blasio told the press. “For more than a century, cars have turned parts of the world’s most iconic park into a highway. Today we take it back. We are prioritizing the safety and the health of the millions of parents, children, and visitors who flock to Central Park.”

The ban will not apply to emergency vehicles, nor will it have any impact on vehicles using the four below-grade crosstown routes that were part of its original design. The mayor had already banned cars from the scenic roads at the northern end of the park back in 2015. Similar scenic drives in the southern end of the park were limited to certain weekday hours.

If it seems like the age of the automobile has finally reached its high-water mark and the flood of vehicles everywhere is receding, you’re right. From London, to Paris, to several cities in Germany, officials are clamping down on how trucks and private cars access urban areas. Transportation Commissioner Polly Trottenberg says that efforts to remove cars from Central Park have been underway for more than 5 decades, starting with limitations on what hours of the day cars were permitted.

Predictably, reactions to the ban are mixed. “I’m pretty happy about it,” pedi-cab driver S.K. Ali tells the New York Post. “We don’t like them. They scare the kids, they hit bikes, they make a lot of noise. Without the cars I’ll probably do more business, and it’ll be safer all around.” Taxi drivers and those who drive for ride hailing services like Uber and Lyft are less enthusiastic, as it means they will have a much more difficult time navigating that part of the city.

“Oh, great,” said one Uber driver. His passenger leaned out the window to say, “This route is the best kept secret in New York. Was that de Blasio? He’s the worst.”

Michael Capirasco, who heads the organization that runs the New York Marathon, is one of the happy ones. “As supporters of a healthy lifestyle, we are so excited that this amazing and beautiful park will be enhanced by being traffic-free,” he says. Paul White, executive director of Transportation Alternatives, has nothing but praise for the ban. “Mayor de Blasio has done what 20 mayors before him could not do. Get cars out of Central Park.” De Blasio also banned cars from scenic drives in the Prospect Park section of Brooklyn in January.

Lots of people still believe they have a God-given right to drive wherever and whenever they want and that public officials have a duty to build more and more roads for their use. That attitude is changing, however, as reducing air and noise pollution is becoming a key policy objectives for many municipal leaders. If you are one of those folks who think the right to drive is enshrined in the Constitution, take heed. Ask not for whom the horn honks. The horn honks for thee.