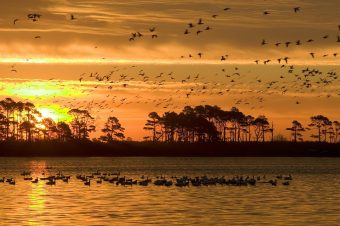 However, the area is also home to poor rural communities whose livelihoods depend on agriculture, fishing and hunting and who are not always able to meet their basic needs due, in part, to erratic rainfall and frequent droughts.

Under the Sustainable Wildlife Management Programme, the new project will partner with the governments of Botswana and Namibia to address threats from unsustainable levels of wildlife hunting in some areas, habitats closure and fragmentation, which prevent animals from reaching the resources they need to survive, as well as poaching and killing of animals as a result of human-wildlife conflicts.

“The focus of the project is to benefit both the wildlife and ecosystems in the Transfrontier Conservation Area and the resilience of local communities that rely on them, at least in part, for food and income,” said Mette Wilkie, Director, Forestry Division, FAO.

The project will focus on supporting the development of a network of community conservancies and community-based organizations that help manage community-owned land to ensure the conservation and sustainable use of natural resources for the benefit of local livelihoods.

Namibia already has an impressive network of 86 community conservancies, which collectively cover 20 percent of the country and are home to nearly 230,000 people.

“This project aims to establish an effective network of community conservancies since they have proven to be a powerful means to combat rural poverty,” said Gilles Kleitz, Director of the AFD Ecological Transition and Natural Resources Department. “In Namibia, for instance, conservancies contributed more than $10 million in benefits such as income, employment remuneration, and in-kind, for example meat, to conservancy members in 2018. The overall economic contributions from these benefits amounted to more than $62 million, including the creation of over 5,300 jobs from conservancy related operations and enterprises.”

The project will be implemented with the support of technical partners such as Wild Entrust Africa in Botswana and the World Wildlife Fund in Namibia and will focus on Botswana’s Khaudum -Ngamiland wildlife dispersal area as well as in Namibia’s community conservancies of the Zambezi Region and around Khaudum National Park.

The results of the project will contribute to the creation of policies aimed at fostering community conservancies development, sustainable hunting and wildlife conservation and enhanced institutional and legal frameworks needed to implement these policies.

The Sustainable Wildlife Management Programme is already promoting a similar approach in Zambia and Zimbabwe. It also ensures a participatory and community rights-based approach across all its sites.