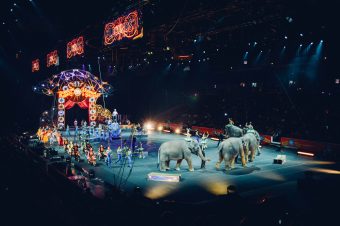 Last week, New Jersey Governor Phil Murphy signed a bill banning the use of elephants, tigers and other wild and exotic animals in circus acts that travel through the state.

Known as “Nosey’s Law,” the bill is designed to protect animals in traveling circus acts from being exploited and abused. Nosey, the law’s namesake, is a 36-year-old African elephant that was forced to travel around the country with a circus even though the animal suffered from crippling arthritis.

“These animals belong in their natural habitats or in wildlife sanctuaries, not in performances where their safety and the safety of others is at risk,” Gov. Murphy said in a press release.

Governor Murphy said that the law finally became a reality because of the years of hard work by Sen. Ray Lesniak, and the bill passed the New Jersey legislature with only three opposing votes. The bill also overwhelmingly passed during the state’s last legislative session, but then-Governor Chris Christie refused to sign it.

Christie’s pocket veto of the bill forced the legislature to start from scratch when Murphy became governor.

One of the bill’s sponsors, Sen. Nilsa Cruz Perez, is now calling on other state’s to follow New Jersey’s lead. She said that circus animals suffer from routine abuse by their handlers for the sake of entertainment. But this law protects other animals from being abused like Nosey— who is now safe and living in an animal sanctuary.

Last year, the public’s growing concern over animal welfare led to the Ringling Bros. and Barnum & Bailey Circus shutting down their “Greatest Show On Earth” after a 146-year run. When they removed elephants from their show tours, the circus was not able to recover from declining ticket sales.

Illinois and New York have already banned the use of elephants in traveling or entertainment acts. But, New Jersey was the first to ban all wild and exotic animals.