The coral reef crisis continues thanks to threats like climate change and pollution. With that in mind, the National Academy of Sciences released a major report last week detailing the high-tech interventions that may be necessary to stop the damage and save the coral reefs. 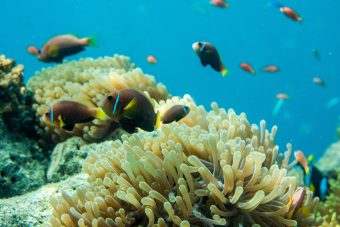 The report — commissioned by the National Oceanic and Atmospheric Administration — outlined two different ways to save coral. One focuses on engineering the coral, and the other involves wild interventions like freezing coral embryos and sperm to preserve biodiversity and then thawing them out in the future. None of the solutions in the report are close to being ready, but the report reveals the urgency of the situation.

“We’re losing reefs so fast,” said Mark Eakin, the program manager of Coral Reef Watch. “It is so critical that we do everything we can to keep coral reefs alive and healthy.”

Some ideas of geoengineering include pumping cooler water from the depths of the ocean to create artificial shade to cool the surface water. Another idea is to alter seawater’s chemistry to make it less acidic. This would include solutions like planting seagrasses to make the ocean more alkaline.

As for the freezing of coral embryos and sperm, scientists have done this successfully with 16 species of coral, but there is a high risk that the freezing process could damage the cells.

Since 1980, coral reefs have declined up to 50 percent in oceans around the world. As the planet warms, the problem will only worsen. This is a life and death situation for the coral as well as the millions of people whose livelihoods depend on coral reefs.

The report from the National Academy of Sciences is one of the most comprehensive of its kind, and an expected follow-up will offer resources to put these ideas into action.