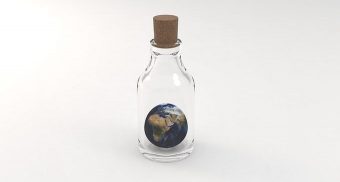 Global warming, under the notorious “business-as-usual scenario” in which humans go on burning fossil fuels to power economic growth, could by 2100 be at least 15 percent warmer than the worst UN projections so far. And the spread of uncertainty in such gloomy forecasts has been narrowed as well.

Climate scientists had worked on the assumption that there was a 62 percent chance that the world would have warmed on average by more than 4°C if no action was taken to reduce greenhouse gas emissions.

But a new study has not only raised the stakes, it has narrowed the uncertainty. There is now a 93 percent chance that global warming will—once again, under the business-as-usual scenario—exceed 4°C by 2100.

And since the world’s nations met in Paris in 2015 and agreed to keep overall global warming to “well below” 2°C, even that figure represents “dangerous” global warming. One degree higher would count as “catastrophic.” And a rise of beyond 5°C would deliver the world into an unknown and unpredictable period of change.

Two U.S. scientists reported in the journal Nature that they went back to the climate models used as the basis for forecasts made by the UN’s Intergovernmental Panel on Climate Change and then matched the reasoning against observations.

In particular, they looked again at seasonal and monthly variability in climate and the latest thinking about energy use, and carbon dioxide emissions, and their impact on temperatures.

There has always been an argument about the long-term accuracy of climate models and what they can usefully predict about the real world by the century’s end. If anything, the new results suggest that tomorrow’s reality could be even worse.

“Our results suggest that it doesn’t make sense to dismiss the most-severe global warming projections based on the fact that climate models are imperfect in their simulation of the current climate,” said Patrick Brown, of the Carnegie Institution at Stanford University in California.

“On the contrary, we are showing that model shortcomings can be used to dismiss the least severe predictions.”

And, the authors warned: “Our results suggest that achieving any given global temperature stabilization target will require steeper greenhouse gas emissions reduction than previously calculated.”

Climate models are only as good as the climate data on which they are based, and one source of uncertainty has been the effect of warming on cloud formation: a warmer world means more evaporation, which could mean more warmth is trapped in the atmosphere—or it could mean more clouds, which reflect more solar radiation back into space.

For decades, researchers have tried to calculate with precision the links between ratios of greenhouse gases released from the combustion of coal, natural gas and oil, and shifts in average planetary temperature.

One of the Carnegie authors, Ken Caldeira of the Institution’s global ecology lab, has so far calculated the rate at which carbon dioxide sets about warming the atmosphere, and the capacity of greenhouse gases to go on warming the world for millennia.

The latest conclusions have been based on simpler evidence: the accuracy with which their forecast models can “predict” the recent past.

“It makes sense that the models that do the best job at simulating today’s observations might be the models with the most reliable predictions,” professor Caldeira said.

“Our study indicates that if emissions follow a commonly-used business-as-usual scenario, there is a 93% chance that global warming will exceed 4°C by the end of this century. Previous studies have put this likelihood at 62%.”