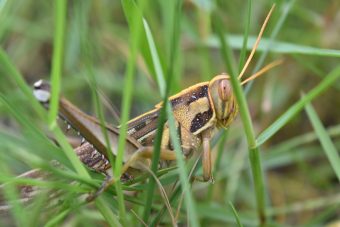 “This is the first time seeing such a scary situation ever since i was born here. Nothing else can compare to such a serious threat,” said farmer Fabian Sisamu.

“It is the worst situation ever; we are fearful of the future,” his friend Ian Mubita adds, disheartened by what may lay ahead.

Fabian and Ian are both farmers in Kasaya, Namibia, a small farming outpost near Africa’s fourth-largest river, the Zambezi. An outbreak of African Migratory and Red Locusts has been terrorizing communities in the country’s northeastern region bordering Zambia and Botswana.

The locusts were first reported in February 2020 in small numbers, but there has since been a significant surge in swarms spotted in various parts of the region.

“At first, we thought they wouldn’t pose such a serious threat to our livelihoods because there weren’t as many as we are seeing now, but it seems we underestimated them,” Fabian continued.

Locust swarms destroy all the vegetation in the area, reducing grasslands to nothing but sand and decimating people’s livelihoods. FAO is working with the Southern African Development Community and the International Red Locust Control Organization for Central and Southern Africa to support the governments of the four affected countries – Namibia, Botswana, Zambia and Zimbabwe – in controlling the locusts. The USD 0.5 million project is supporting ground and aerial surveillance, mapping and control operations, and there are ongoing efforts to raise more funds to support control efforts.

“These locusts are very vicious; they have no mercy at all. They chow down anything green that they come across and hardly leave anything behind,” explained Ian.

“This is also my first time seeing so many locusts like this,” began Lionzi Hastings, a middle-aged smallholder farmer who owns a vegetable garden in Kasaya.

“They have completely wiped out the grass surrounding my garden,” said Lionzi, pointing to the riverbank, which lays a few meters away from his garden. “I am afraid that they might come and clean out my garden if they are not brought under control,” he said.

A few kilometres west of Kasaya, in Kabbe North constituency, the local community leader in the area says the situation is critical and requires all hands on deck if the fight against the locusts is to be won.

George Matengu says that his community first started noticing the locusts last November and then again in July when the floodwaters subsided.

“My field where i had planted maize was badly affected, only the stalks of the crops remained, but everything else was destroyed,” he said.

His situation is not unique. Many other households throughout the area were affected the same way. He says the food security situation has become dire and that most people are now surviving on food they buy at the market – like maize meal – using a large portion of their already minimal household incomes.

FAO is supporting the national locust control effort by providing logistical and technical support in the safe use of pesticides to the government’s teams carrying out the spraying, as well as providing some of the pesticides and the necessary protective personal equipment. 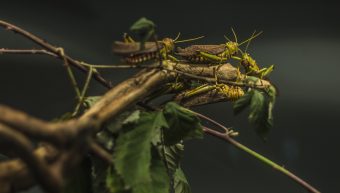 “The pesticide appears to be effective in that we have now started seeing dead locusts as they succumb to the spraying programme of the government,” said George.

“We remain hopeful that the situation will be brought under control before the planting season starts and that efforts to reduce the outbreak will be doubled,” he added.

Helping to control the locusts

FAO recently launched the Southern Africa Emergency Locust Response and Preparedness Project. In Namibia, FAO has provided technical and financial assistance to the country’s Ministry of Agriculture, Water and Land Reform to ensure the training and deployment of technical staff and strengthen the ongoing battle against the locusts.

The project will increase the emergency response capacity in the locust hotspots and strengthen coordination and information exchange among the affected countries. Around 7 million people in these four affected countries are still recovering from the 2019 drought and the economic impacts of the COVID-19 pandemic.

Locusts are among the most destructive pests in the world. One swarm can contain tens of millions of adults – there are currently multiple swarms in the southern region. A 20 km2 swarm of locusts with an average density of 60 million adults per km2 can eat the same amount of food in one day that would feed 2 500 people for a year.

FAO is working with affected countries for both of the emergencies, helping to protect the food security and livelihoods of the millions affected.