A record number of dolphins have washed up on France’s Atlantic coast in the last three months, many with devastating injures. 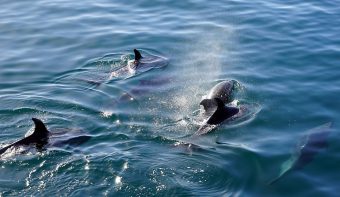 Environmental campaigners say 1,100 mutilated dolphins have been found since January, but the real figure could be 10 times higher as many bodies sink without trace. Activists warn the marine slaughter could threaten the extinction of the European dolphin population in the region.

The cause of the deaths is not known but it is thought fishing trawlers catching sea bass off the Atlantic coast may be responsible. Autopsies suggest the dolphins sustain catastrophic injuries attempting to escape nets or when trawler crew attempt to cut them free after they are caught.

Lamya Essemlali, the president of the ecology campaign group Sea Shepherd, said the real death toll was probably between 6,500 and 10,000 dolphins a year.

She said the animals were being trapped by trawlers working in pairs and dragging a net between them. Sea Shepherd released a video of dolphins caught in trawler nets last month as part of its campaign Operation Dolphin Bycatch.

“These fishing vessels have nets that are not selective at all so when they put their net in the water and the water is full of dolphins they get in the net. Dolphins are not fish, they are mammals, and they need to get to the surface to get air,” Essemlali told Associated Press.

“So what happens is they suffocate and they also injure themselves, when they try to get away from the nets and that’s the reason why we find all these marks on their bodies.”

Essemlali said the number of dolphins dying in this way had been increasing over the past three years, but added: “Right now it’s such an alarming rate they could drive the European dolphin population to extinction.”

She called on the French government to carry out greater surveillance of trawlers, but said Sea Shepherd’s warnings had so far fallen on deaf ears. Essemlali also blamed public demand for cheap fish.

The French agriculture minister, François de Rugy, has announced an “action plan” including fitting fishing nets with acoustic “pingers” to warn off dolphins, but Sea Shepherd says many trawlers do not activate them for fear they will scare fish away.