By 2040, most of the meat on our tables won’t come from animals. 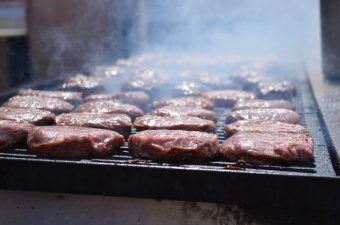 That’s the prediction from researchers at global consultancy AT Kearney, who predict by this time, 60% of ‘meat products’ will be either artificially grown in giant laboratories or be replaced by plant-based proteins such as seitan, tofu and mycoprotein.

Many scientists suggest the conventional meat industry plays a significant role in contributing to climate change, due to the amount of energy and water required to raise, house, transport and kill animals, as well as the amount of methane created by industrial farming.

Currently, nearly half the world’s crops are grown to feed livestock but only 15% of the calories they contain end up being converted into meat and then eaten by humans – this contrasts with cultured meat and meat replacements, which are thought to retain around 75% of the calories inputted.

The report estimates in approximately 20 years, 35% of all meat will be cultured and 25% will take the form of vegan replacement options.

The firm estimates around $1 billion (£790m) has already been invested in meat-replacement products and says it believes the cultured meat market will dominate in the long term because they will more closely reproduce the taste and texture of traditional animal-sourced meat.

Carsten Gerhardt, Partner at AT Kearney, said: “The shift towards flexitarian, vegetarian and vegan lifestyles is undeniable, with many consumers cutting down on their meat consumption as a result of becoming more conscious towards the environment and animal welfare.

“For passionate meat-eaters, the predicted rise of cultured meat products means that they still get to enjoy the same diet they always have but without the same environmental and animal cost attached.”