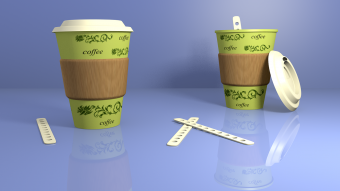 Ministers have rejected calls for a charge on the 2.5bn disposable coffee cups thrown away each year because they believe coffee shop chains are already taking enough action to cut down waste.

Therese Coffey told the Liberal Democrats, who have urged the government to impose a 5p charge similar to that levied on plastic bags, that industry and chains were already doing enough voluntarily.

“Many major chains are taking their own action to incentivise environmentally friendly behaviour, for example, offering a discount on drinks if customers bring their own cup,” the environment minister wrote in a letter to Lib Dem MEP Catherine Bearder.

But Starbucks is the only major chain to offer customers a discount, of 25p, if they bring in their own cup. Costa and Pret a Manger give coffee drinkers no financial incentive to reduce the waste created by takeaway cups. Caffe Nero gives customers double stamps on its reward cards for reusable cups.

The minister also pointed to the establishment of an industry group to look at the problem.

“This letter shows the Conservative government is in complete denial about the scandalous waste caused by throwaway coffee cups. Not only is the minister refusing to act, she is refusing to even acknowledge this as an issue,” said Bearder.

It emerged earlier this year that only one in 400 coffee cups are recycled because they are made of a difficult to recycle mix of paper and plastic. That prompted calls for a charge on takeaway cups by the chef Hugh Fearnley-Whittingstall and the then-environment minister, Rory Stewart, and saw Starbucks begin a trial of recyclable cups.

Last month a Cardiff University study said the 5p bag charge had been so successful in England that a fee on cups could work too. The research found that the bag charge had led people to more willingly embrace other waste policies too, such as a charge on plastic bottles or coffee cups.

“We saw with the 5p plastic bag charge how a small intervention can make a huge difference in cutting unnecessary waste and protecting the environment,” said Bearder. “The Conservatives should build on this success, not leave it up to the private sector alone when that approach has so clearly failed in the past.”

The Paper Cup Recovery and Recycling Group, an industry body founded in 2014, defended its record on waste. “The industry recognises it has to do something. Therefore it’s done exactly that and said we recognise the concerns and let’s get some sustainable solutions to recycle more cups,” said the chairman, Neil Whittall.

There are two main companies in the UK that recycle the current cups, which are made up of about 5% plastic to stop them leaking. Whittall said although he could not give an exact figure for how many cups are recycled, the market for disposable cups was still growing.

But the government said it has no plans to impose a mandatory charge on the cups, which experts recently said will take decades to break down.