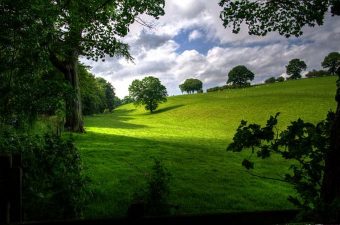 London Mayor Sadiq Khan has launched plans to turn his city into the world’s first National Park City and one of the greenest cities on Earth, including the creation of a £9 million fund to increase the cities’ trees and green infrastructure, and a proposal to build more green roofs, walls, and rain gardens.

Announced last week, the Mayor of London, Sadiq Khan, launched plans that he hopes will make London the world’s greenest city by dramatically increasing the number of trees and green infrastructure, protecting the city’s Green Belt, and improving green spaces. The initiatives are all part of the Mayor’s draft Environment Strategy, which aims to tackle pollution, promote renewable and cleaner energy, and make more than 50% of London green by 2050.

Already home to more than 8 million trees, numerous parks and gardens, and increasing numbers of green roofs and walls, London is already relatively green, but Sadiq Khan wants to expand that level dramatically.

“London is home to outstanding green spaces that I want to protect, invest in and improve as we aim to become the world’s first National Park City,” Sadiq Khan said.

“We can also increase the amount of greenery in the city by installing many more green roofs and making our streets greener. From our famous Royal Parks, to our much-loved community gardens and urban nature reserves like Woodberry Wetlands, this ‘green infrastructure’ is a vital asset that improves air quality, boosts quality of life, conserves wildlife and attracts thousands of visitors.

“I’ve set out my plans to improve London’s environment by fighting pollution, tackling waste and promoting cleaner energy so we can make London a healthier city that adapts to the impacts of climate change. I want to hear your views and ideas about how we can make London the greenest city in the world.”

The Mayor will use city planning regulations to first of all protect London’s Green Belt — a ring of land that is designed to prevent urban sprawl by preventing what is deemed “inappropriate” development (see right) — a policy that is found throughout the UK. In addition to protecting the Green Belt, London will also seek to promote new green infrastructure development, including things like green roofs (roofs literally covered in grass and plants), green walls (building walls covered in plants), and rain gardens (small green spaces intended to prevent flooding), as well as more habitats for wildlife. The City of London will also fund the planting of thousands of trees and improvements to existing green spaces. To begin with, Mayor Khan announced a new £9 million Greener City Fund, which is already open to local groups to apply for £1 million to plant neighborhood trees and maintain green community areas.

Given that this is the world’s first attempt at making a National Park City, the Mayor will also seek to work with partners across London to set out criteria for exactly what a National Park City will look like, including:
 Protecting and increasing the amount of green space in the capital
 Increasing access to green spaces for Londoners of all ages, particularly in areas where there is currently a deficiency
 Increasing the quality of green spaces, ensuring they are well maintained and create healthy habitats for wildlife
 Valuing London green spaces, accounting for the health, environmental, social and economic benefits it brings to London.
Additionally, this is all gearing up towards launching London as a National Park City at an international summit in Spring of 2019, which are based on several key proposals that are aimed at helping the city reach this target date:
 Creating a ‘Challenge Map’ to highlight areas of London that should be priorities for green infrastructure investment as part of the Mayor’s target to make more than 50% of London green by 2050
 Setting up a Green Spaces Commission to work with environmental experts to help boroughs attract investment, and transform and preserve their parks and green spaces
 Developing a new ‘Urban Greening Factor’ to ensure that green roofs, green walls — walls which are covered in plants and grass often by busy road sides and help lower pollution, trees and rain gardens are incorporated into new developments in London. The Mayor will also use his planning powers to protect the Green Belt and Metropolitan Open Land
 Targeting ‘grey’ areas to make them greener. With more Londoners living in flats and working in high rise offices, and with fewer people having access to private gardens, the Mayor wants to ensure more streets and public spaces become greener to improve health and encourage more walking and cycling.

“One of our main goals is to make the majority of London physically green and we very much looking forward to working with the Mayor on this target. The capital is famous for being a financial, cultural and political centre, but it’s an ecological centre too, with an incredible 14,000 species of wildlife, 3.8 million gardens and nearly as many trees as people. I look forward to working with the Mayor through the National Park City Foundation which is galvanising a movement to turn this big vision for London into a reality.”