Lions in Namibia have turned to hunting seabirds and seals in the face of scarce food resources in the desert landscape, research has found. 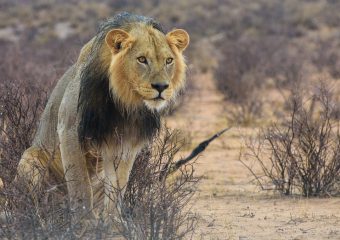 The desert lions, which are found exclusively within the country’s Skeleton Coast region, are the only lions known to target marine life. Among the creatures they have been recorded eating are fur seals, flamingos and cormorants.

The conservationist Flip Stander, the author of the study published in the Namibian Journal of Environment, said the discovery showed the big cats have learned diet adaptability is key to survival in this unforgiving terrain.

The Skeleton Coast spans the coastal backbone of Namibia and is the driest place in sub-Saharan Africa, receiving as little as 5mm (0.2in) of rain a year. The desert lion’s usual prey of oryx and ostriches are thin on the ground there. The neighbouring ocean, however, is rich in life, sustaining nearly 1m Cape fur seals that breed on the shoreline, and a multitude of seabirds.

Stander explained “lions have to be resourceful by hunting a range of different prey species in a wide variety of habitats in their home range”. Seals are prime targets for these big cats, being slow to manoeuvre on land and rich in fat.

While this is not the first known record of lions feeding on marine life in Namibia, such rare behaviour has not been documented for decades. “In 1985, an adult male lion was seen feeding on a beached pilot whale,” said Stander, but the behaviour was eliminated along with the lions.

Desert lions became locally extinct in 1990 due to persecution from livestock farmers. However, by 1997, a pride returned to the area and numbers have been increasing ever since. The area now sustains approximately 130-150 lions.

The first time lions were recorded feeding on marine life since returning to the desert was in 2006, where lionesses were observed eating a seal. Then, in 2017, a lioness in poor condition was spotted hunting cormorants, while others were seen hunting flamingos and teals. Stander said he has observed lions foraging in intertidal areas, so it is possible their diet could expand to other marine life such as shellfish, crabs and sea turtles.