Small bits of plastic packaging from waste food make their way into animal feed as part of the UK’s permitted recycling process. 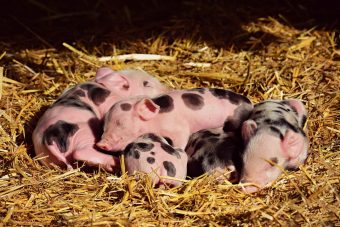 Plastic traces in animal feed could pose a risk to human health and urgently need to be the subject of more research, experts have told the Guardian.

Their comments came after British farmer Andrew Rock contacted the Guardian, having noticed plastic shreds in his animal feed. Rock was told by the suppliers that this was a legal part of the recycling process that turns waste food, still packaged, into animal feed.

Rock runs a small-scale pig farm in Lincolnshire, and had been spotting tiny pieces of plastic in his pigs feed for several months. “In the back of my head I thought maybe it was people dropping gloves into the feed mill. I took a kilo scoop out of the bag and I did this over several weeks. I laid it out in the light and I found plastic in nearly every scoop.”

He contacted the suppliers who had sold him the feed and was shocked to discover that the fragments were not a mistake, but in fact a legal part of the recycling process that turns waste food, still packaged, into animal feed.

More than 650,000 tonnes of unused food, from loaves of bread to Mars bars, are saved from landfill each year in the UK by being turned into animal feed. The system that strips off the plastic wrappings can’t capture it all, and so in the UK a limit of 0.15% of plastic is allowed by the Food Standards Agency. The official EU level for plastic permitted in animal feed is zero although in reality many other countries operate within the same 0.15% limit.

In response to his questions about whether even these limits were safe for consumption, the suppliers told him that the product was within legal limits and came from a third-party mill accredited by Ufas, the Universal Feed Assurance Scheme.

Ufas is a voluntary scheme, run by the Agricultural Industries Confederation. They confirmed to the Guardian that they were going to look at the complaints made by Mr Rock, but said their findings would be covered by strict confidentiality agreements.

But Rock says it is the fact that this is legal that shocked him. “I think the only people that are not shocked by this are the people involved in the animal feed manufacture. I was disturbed by their casual acceptance.”

Dr Heather Leslie told the Guardian that “the only level of plastic in animal feed should be none at all”. Leslie is an ecotoxicologist specialising in microplastics at the Vrije University in Amsterdam. “There is a lack of transparency for what the animals that citizens are eating have been fed. Citizens have no way of knowing what they are actually eating.

“Tiny microplastics can be released from larger pieces during feed processing and the smaller fractions are, we think, even more risky for the animal’s health. We’ve known for decades that after ingestion fine plastic particles cross the mammalian gut barrier and enter the bloodstream. It’s already been tested in pigs, dogs, rats and also in chickens. From the bloodstream they can be transported to tissues and organs. We know this from studies with rats.”

“I definitely hope there is more research,” said Dr Stephanie Wright, a Research Associate at King’s College London studying the impact on human health of microplastics. She pointed out that there is a risk of chemicals leaching from plastics, even very small parts. “The chemicals at microscopic level in the network that make up plastic, [that are used] to give flexibility, or flame retardent properties, they can come off very easily, they are susceptible to leaching. This is why BPA [a chemical found in food packaging] was banned from baby bottles, because it leached into the milk from the plastic.

She cautioned however that the chemical burden on humans and animals from the environment around them is so great that it would be difficult to know whether plastic in animal feed played a key role. She said: “We have currently produced around 8bn tonnes of plastic. By 2050 there will be 25bn tonnes on the planet. Human chemical production is rising.”

Paul Featherstone, chairman of the UK Former Foodstuffs Processors Association and group director of animal feed producer SugaRich, told the Guardian that every effort was made in the process to keep plastic traces to an absolute minimum, and pointed out that the issue of preventing waste food from going to landfill was a huge environmental concern.

“In line with the vast majority of EU countries we have a tolerance of 0.15% by weight of plastic residue. We don’t set that as a target, we want to be way, way beneath that. We don’t want to be putting anything injurious to an animal into feed.

“This practice has been around a long time, since the farmer living next to a biscuit factory would have taken the waste. But now it’s been formalised and it’s really gone up a gear since the idea of the circular economy developed. This is part of the sustainable development goals. We have to look at how we get this waste into the feed chain safely. The risks posed traded off against the benefit Europe-wide of 3.5m tonnes of food going back into use is a logical and risk-assessed benefit that we should all think is a good idea.”

Globally, about a third of all food produced for human consumption is lost or wasted from the farm to the fork. Food that is ultimately lost or wasted consumes about a quarter of all water used by agriculture, requires a land area the size of China and is responsible for an estimated 8% of global greenhouse gas emissions.

The FSA told the Guardian: “Based on current information, including the evaluation on the safety of microplastics exposure from food undertaken by the European Food Safety Authority (EFSA), the FSA considers it is unlikely that the levels of microplastic particles that have been reported to occur in certain types of food would cause harm to consumers.”