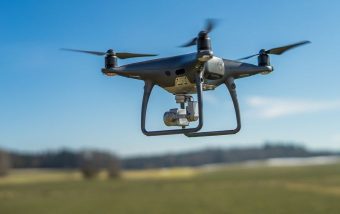 The city of Katowice in Poland has begun using drones outfitted with various air quality sensors as a means of locating illegal emissions sources — and thus as a way of locating otherwise hard to locate offenders.

To explain that a bit more, the country of Poland reportedly has something of a problem with regard to the burning of illegal fuel materials in households and buildings — a problem that is partly responsible for the air pollution problems present in some parts of the country. And Katowice, you see, is a mining town…so effective, if dirty, fuels are in relative abundance, and cheap.

The deployment in the mining town of Katowice represents a test of sorts, according to Radio Poland, with a possible wider rollout elsewhere pruning the local police find the drones to be effective in the detection of illegal emissions.

“In a city as troubled by pollution, and with as small a population as 300,000, it seems an effective test-site for this smog-combatting UAV technology. Reportedly, the drone being used to track certain kinds of smoke was supplied by Katowice-based aerial surveillance company Flytronic, and can actually evaluate various chemical makeups with its onboard sensors.

“The technology employed here has apparently worked so well that local police have already fined an offender $150 (500 PLN) for breaking the law. According to Radio Poland, Poland’s newly elected Prime Minister, Mateusz Morawiecki, made it a point to focus on the country’s pollution during his time in office. It’s no wonder that drones are being looked at to solve the country’s pollution problem — which apparently kills 50,000 citizens a year — as UAVs have become far more sophisticated and affordable in recent years.”

This deployment comes ahead of Katowice’s hosting of the 2018 United Nations Climate Change Conference later this year (December 2018) — with the idea no doubt being to hopefully clean the air up a bit before the event.